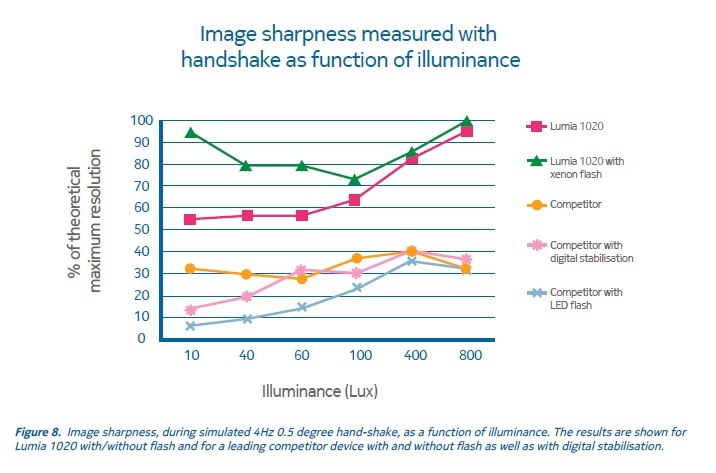 Nokia has released “Whitepaper” on Lumia 1020’s camera prowess and tech that goes inside making it amazing. While going through it, we couldn’t help but notice this part and share with you. So, Nokia has compared Lumia 1020’s 5 MP performance with a leading competitor device with 13 MP camera, easy to guess as SGS4 and in fact plotted it on a neat graph shown above. A hand-shake simulation was introduced for this test to mimic real-life situations.

So, what the graph shows that with help of OIS and Xenon, Lumia 1020 mostly achieves it theoretical resolution of 5 MP easily in even low-light conditions, while the 13 MP sensor of SGS4 uses only 10% of its resolution in low-light conditions and even in brightest conditions never goes above 40%. So, the question to be asked here is not why 41 MP on Lumia 1020, but rather, why even 13 MP on SGS4, when it just attains 10% in low light.