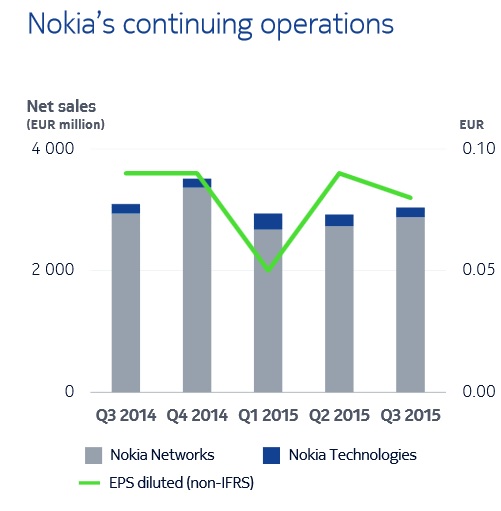 On the basis of strong financial performance of its continuing operations (Businesses) in Q3 2015, Nokia has raised outlook for the Full-year.

By combining with Alcatel-Lucent, Nokia expects to create an innovation leader in next generation technology and services for an IP connected world. After the closing of the exchange offer, Nokia’s Networks business would be conducted through four business groups that would provide an end-to-end portfolio of products, software and services: Mobile Networks, Fixed Networks, Applications & Analytics and IP/Optical Networks. Alongside these, Nokia Technologies would continue to operate as a separate business group with a clear focus on licensing and the incubation of new technologies. Each business group would be positioned for clear leadership in its particular market – with exceptional assets and unparalleled capabilities to accelerate industry innovation while creating long-term value for shareholders.

Following the closing of the proposed transaction, Nokia expects to have a strong balance sheet, with the financial resources to enable investments in next generation solutions and services over the long-term.
Nokia’s Board of Directors has conducted a thorough analysis of Nokia’s potential long-term capital structure requirements, and is today announcing plans for a two-year, EUR 7 billion program to optimize the efficiency of Nokia’s capital structure, subject to the closing of the Alcatel-Lucent and HERE transactions, as well as the conversion of all Nokia and Alcatel-Lucent convertible bonds. This comprehensive capital structure optimization program would focus on shareholder distributions and de-leveraging, while maintaining Nokia’s financial strength.

The program would consist of the following components:

“We are committed to effective deployment of capital to drive ongoing value creation,” said Timo Ihamuotila, Executive Vice President and Group Chief Financial Officer. “We believe our planned EUR 7 billion capital structure optimization program would enable the combined company to make swift and orderly progress towards a more efficient capital structure, in alignment with the long-term interests of the shareholders of the combined company. Longer-term, we continue to target an investment grade credit rating, which would further affirm Nokia’s competitive strength.”

On April 15, 2015, in conjunction with the announcement of the Alcatel-Lucent transaction, Nokia announced that the combined company would target approximately EUR 900 million of annual operating cost synergies to be achieved on a full year basis in 2019. This target assumed the closing of the transaction in the first half of 2016.

Today, Nokia announced an accelerated target of approximately EUR 900 million of annual operating cost synergies to be achieved on a full year basis in 2018, relative to the combined non-IFRS results of Nokia and Alcatel-Lucent for full year 2015. This target is now subject to the closing of the transaction in the first quarter 2016. The associated restructuring costs are expected to be slightly higher than EUR 900 million, and the related cash outflow is expected to be approximately EUR 900 million.

The operating cost synergies are expected to be derived from a wide range of initiatives related to operating expenses and cost of sales, including:

The operating cost synergies are expected to create a structural cost advantage and foster a corporate culture that emphasizes execution excellence. This strong foundation would enable the long-term investments that are essential to achieve the combined company’s strategic objectives, serve the changing needs of customers and lead the next wave of technological change in the industry.