Nokia’s CEO talked about moving with smartphone strategy even faster in wake of a very bad Q1 2012, where Nokia has sold only 12 million smartphones. This  bad show in Q1 2012 has been attributed to declining smartphone sales in major markets like China and India.

Everyone expected Lumia 610 (Nokia ‘s windows phone volume device) to hit the market somewhere in May, and it was confirmed by Nokia as well. But seems that Nokia has yet again increased its clock speed and has launched Lumia 610 few weeks ahead of schedule. Also the launch is going to take place in Asia from where the sales volume for low priced smartphones comes. 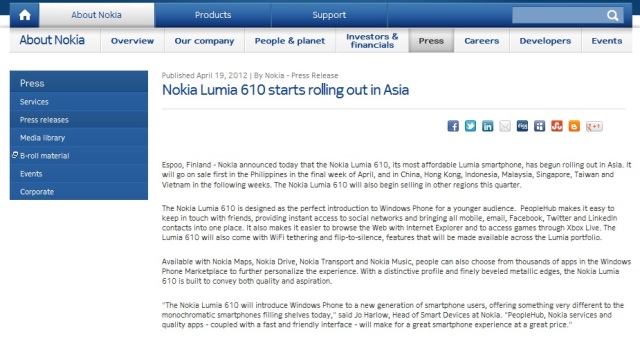 It will go on sale first in the Philippines in the final week of April, and in China, Hong Kong, Indonesia, Malaysia, Singapore, Taiwan and Vietnam in the following weeks. The Nokia Lumia 610 will also begin selling in other regions this quarter. The Nokia Lumia 610 will be available in black, cyan, magenta and white, and will sell at an estimated retail price of EUR 189 before applicable taxes and subsidies.

Read more from the Nokia’s press release below,

The Nokia Lumia 610 is designed as the perfect introduction to Windows Phone for a younger audience.  PeopleHub makes it easy to keep in touch with friends, providing instant access to social networks and bringing all mobile, email, Facebook, Twitter and LinkedIn contacts into one place. It also makes it easier to browse the Web with Internet Explorer and to access games through Xbox Live. The Lumia 610 will also come with WiFi tethering and flip-to-silence, features that will be made available across the Lumia portfolio.

Available with Nokia Maps, Nokia Drive, Nokia Transport and Nokia Music, people can also choose from thousands of apps in the Windows Phone Marketplace to further personalize the experience. With a distinctive profile and finely beveled metallic edges, the Nokia Lumia 610 is built to convey both quality and aspiration.

“The Nokia Lumia 610 will introduce Windows Phone to a new generation of smartphone users, offering something very different to the monochromatic smartphones filling shelves today,” said Jo Harlow, Head of Smart Devices at Nokia. “PeopleHub, Nokia services and quality apps – coupled with a fast and friendly interface – will make for a great smartphone experience at a great price.”

The Nokia Lumia 610 is also a great smartphone for students who will appreciate the built-in Microsoft Office app. Word mobile, PowerPoint mobile, Excel mobile to manage documents, and OneNote mobile to capture notes, ideas, pictures and voice memos make working on the go easier. With SkyDrive, files and notes can be synchronized, and opened and edited from the PC or the phone.