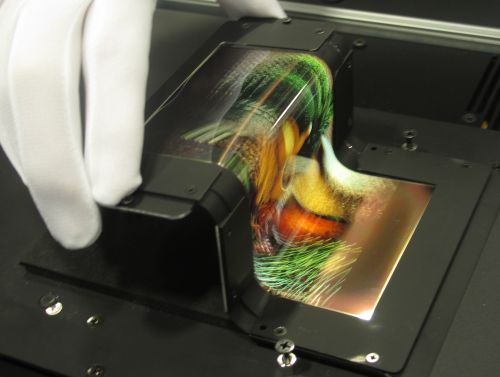 Nokia has stolen some limelight at recently conduct SID 2014, by displaying two foldable OLED panels. These panels have sizes of 5.9 inch, a display resolution of 1,280 x 720 and 249ppi pixel density. Nokia has worked with Semiconductor Energy Laboratory (SEL)  for developing these.

The first display can be folded like a book and has a 2 mm curvature radius.

The second display is a three fold display with 4 mm curvature radius.

One really great thing about these two displays is that these can be folded for more than 100,000 times, without breaking them. Nokia has been very interested in developing Foldable /bendable consumer technology and we have reported about Nokia patenting truly foldable battery tech. It has also patented a flexible battery with swiss-roll design.

New Nokia has certainly demoed its R&D strength at SID 2014, but question arises, will foldable panels, batteries etc may hint about some upcoming foldable consumer product from Nokia, or as Nokia has earlier mentioned they will just license them to OEMs?