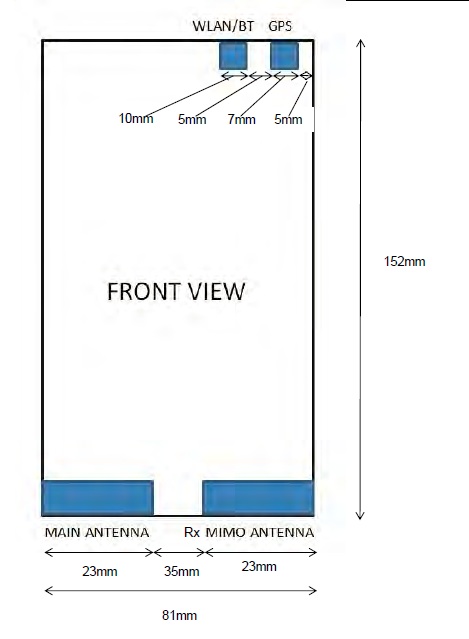 Here is one of the earlier leaked images showing thin bezels on Lumia 1520.

Well the giant “Bandit” has already visited FCC as RM-940 which we revealed from “BSIG” certification to have Snapdragon 800 CPU and Adduplex data confirmed as AT&T bound device. So, as expected it has AT&T LTE band and size wise it is the biggest Lumia yet by a huge margin. As compared to the second largest Lumia, Verizon bound Lumia 929 which has the size of 137 x 71 mm, Lumia 1520 will have size specs of 152 x 81 mm. Giant, didn’t we say that.

Also interesting to note that RM-938 has also been mentioned in the filing of the RM-940 and even the difference between them is highlighted. RM-938, we can bet will be the global version and surprisingly revealed to have “In-built wireless charging” while RM-940 will have the Wireless Charging interface pins in the backcover like Lumia 1020 or Lumia 925. So, may be RM-938 will be heavier of two. Anyways, may will welcome decision of Nokia to have in-built wireless charging in Global version.

Difference between RM-938 and RM-940 is that DTM feature and WCDM1700/2100 (Band 4) will be disabled from RM-940, and RM-940 will GPRS support multi-slot class 10. In the testing reported here multi-slot class 12 has been available as worst case in all the samples. Additionally, difference between RM-940 and RM-938 is that RM-940 has only Wireless Charging interface pins in the backcover, while RM-938 has built-in Wireless Charging (WPC/Qi) loop. This HW difference was tested according to FCC KDB 648474 D03 Wireless Chargers Battery Cover V01R02