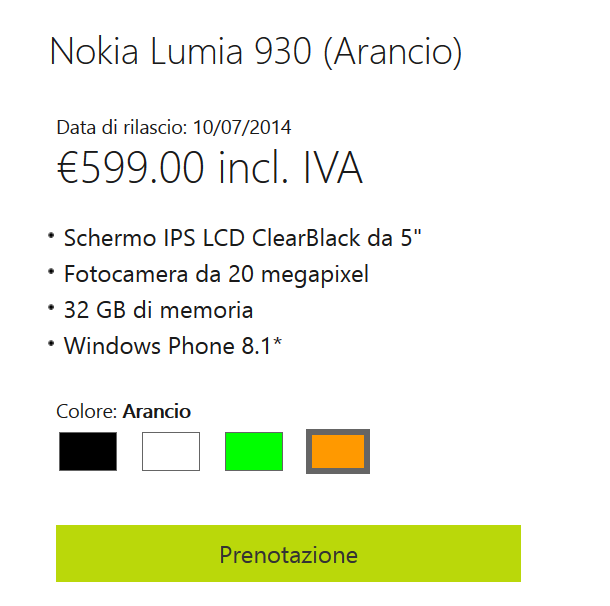 The new flagship of Microsoft Mobile / Nokia (I still have to get used to this) at last has an official release date. One of the first countries receiving the Lumia 930 will be Italy, a country where Windows Phone has a high market share. The date is given at the official Italian Microsoft Store, the device will be available at the 10th of Juli. I hope this really is the final date as the Lumia 930 release date on the German Microsoft store was changed from 11th July to “Available in the coming weeks”…..

A lot of rumors are floating around and it is time for Microsoft to give customers more insight. As a Dutchmen I hope it is not to late to get my orange one for the World Cup Finals because Orange is kind of a thing for us…

I am still wondering why the pace of releasing new phones from Microsoft Mobile is getting so slow??? If Microsoft Mobile wants to keep up they have to act much faster on all areas. Make a flagship with the latest Snapdragon 805 CPU, WQHD display like Samsung released, SD card support and build innovative UI stuff into Windows Phone like fastlane (vote) and startscreen location awareness (vote). What do you think? Let us know!