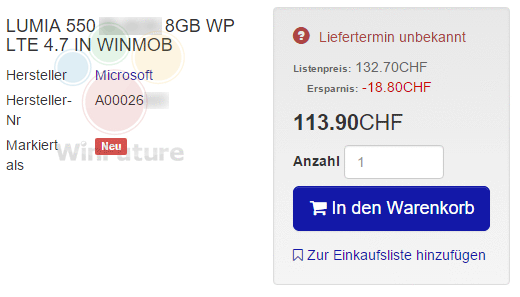 Microsoft Lumia 550 has been officially announced by Microsoft during an event on October 6. You can now read about its Price, Specifications and release dates for various markets by clicking here.

We earlier exclusively reported about two variants of a low to mid-range upcoming Lumia with 4.7-inch screen. First we had reported this Lumia with manufacturer code RM-1127 from Zauba import data with a 4.7-inch display and both Single Sim / Dual-Sim variants. Later another variant RM-1128 was found in a GFXBench entry.

Both the Zauba and GFXBench leaks were consistent in terms of 4.7-inch display and very close variant code usually belonging to the same device. Now, Lumia 550 listing has leaked from database of a Microsoft’s European Distribution partner.

Again one can notice the 4.7-inch display and 8 GB internal memory that is consistent with GFXBench and Zauba leaks. Based on all the leaks, it seems we may see Lumia 550 getting unveiled either during October 6 event or may be later.

Now we have one more screenshot confirming Lumia 550’s existence. A “Swiss Distributor” has put up the Lumia 550 listing and then removed some days back. But eagle-eyed Bloggers at WPApps.es managed to get the screenshot.

Thanks Joel for the tip. Cheers!!