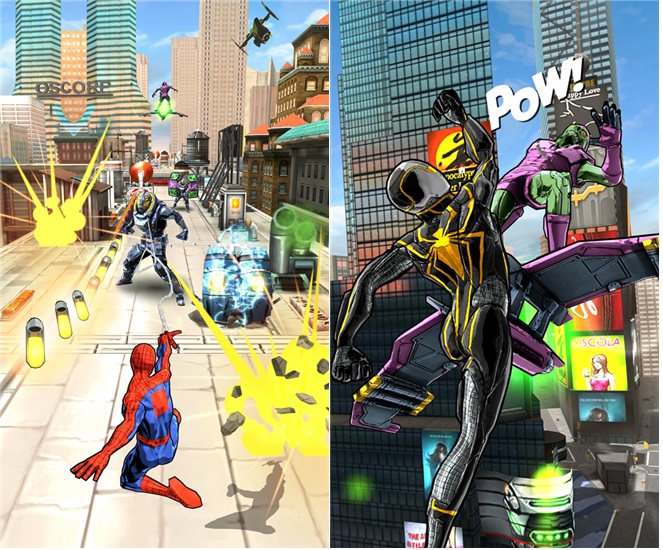 One more big title from Gameloft is here for Windows Phone devices.  Spider-Man Unlimited lands on store for devices with at least 1 GB RAM and doesn’t support HTC 8X. Good news is that it is free to play and has landed on Windows Phone along with other platforms.

Unite the Spider-Verse and recruit an army of Spider-Men to stop the new Sinister Six, who have opened a dimensional portal to summon different versions of themselves! The Sinister Six are moving from dimension to dimension – destroying each one – and ours is next!

THE GREEN GOBLIN (ISSUE 1) AND THE VULTURE (ISSUE 2) ARE HERE! Issue 3 coming soon…

FIRST NARRATIVE RUNNER!
• A continuing episodic adventure: The Sinister Six are moving from dimension to dimension – and our world is next! But it ends now… with an army of Spider-Men!
• Dive into an extensive Marvel Universe spanning over 50 years of Spider-Man with iconic characters, including multiple variations of each villain, as well as Nick Fury, Mary Jane, and Black Cat!
• Written with an experienced Spider-Man comic writer to ensure a faithful recreation of the Spider-Man Comics!

MOST SPIDER-MEN EVER IN A GAME!
• Summon, collect and play with tons of Spider-Man cards from the Marvel Universe, including Spider-Man Noir, Cosmic Spider-Man, and Scarlet Spider!
• Collect, fuse, and level up your Spider-Men, each with their own unique in-game benefits, and send them on Spidey Ops missions!
• CONSISTENT RELEASE OF NEW SPIDER-MAN CHARACTERS!