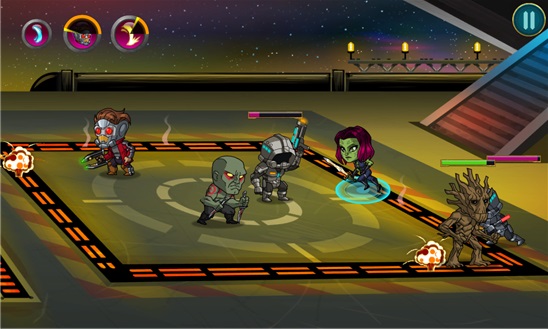 Dungeon Gems is free to play RPG style game from Gameloft, which has brought many new games in last some weeks to Windows Phone.

Join players from all around the world in a quest to defeat the dragons!
Experience thrilling, fast-paced puzzle gameplay with strategic RPG-style party management.

EASY TO LEARN, HARD TO MASTER
» Drag your finger over elemental gems to link them and trigger your heroes’ attacks.
» Link like-coloured gems to launch focused attacks or…
» Link differently coloured gems to unleash devastating multi-element attacks, but beware: These will cost you precious Action Points.

RECRUIT A DARING PARTY
» 220 powerful warriors await your summons.
» Choose wisely: Each warrior can launch a different elemental attack, but is vulnerable to an element as well.
» Power up your favourite warriors, then evolve them into new, legendary forms!

YOU DON’T HAVE TO FIGHT ALONE
» There’s always someone ready to help you in your quest, be it a friend or a complete stranger.
» Choose your allies wisely, as you need the right kind of strength to defeat particular foes.
» Compare your progress to your friends’ and gain bonuses when completing dungeons together.

Guardians of the Galaxy from Marvel is a bit pricey at $4.99 and there is no free trial too.

NO IN-APP PURCHASES AND NO INTERNET CONNECTION REQUIRED TO PLAY

Game Features
• No In-App Purchases and no Internet connection required to play!
• Unlock, upgrade and control 25 characters from the Guardians of the Galaxy universe.
• Travel the Galaxy and battle through more than 60 levels of real-time, gesture-based combat in Story Mode.
• Story and Arena Modes! Progress through the story and defeat villains in Story Mode then switch up your GOTG team and recruit additional heroes and villains for survival in Arena Mode.
• Customize your team with the Guardians and their Allies. Recruit heroes, level up their skills, and then outfit them for battle using unique item buffs and the mysterious Iso-8.
• Unlock combo moves and unleash crushing attacks from powerful pairs like Rocket and Groot or Drax and Gamora!
• Go head to head with a roster of Guardian of the Galaxy villains like Korath, Nebula, and Ronan!
• Download now and play in your choice of English, Chinese, French, German, Italian, Japanese, Korean, Portuguese, Russian, or Spanish

Guardians of the Galaxy link