Skip to content
You are here
Home > Latest Posts > Pixels & Videos > DPReview: Lumia 1020 competes with the best DSLR yet made in bright light. Years ahead of iPhone 5S in camera quality. 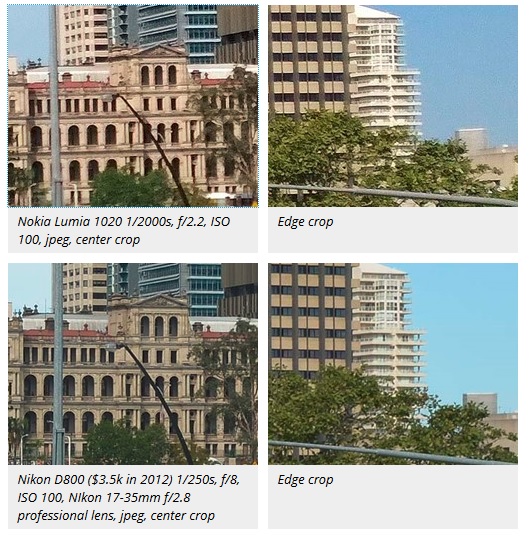 DPReview has done an imaging comparison between Lumia 1020, iPhone 5S, many DSLRs and even film cameras to see “A look at how far we’ve come” in terms of smartphone imaging progress.

They have tested the cameras in both bright light and low-light conditions and Lumia 1020 impresses them with its detail capture and less emphasis on noise reduction.

Talking about details resolved reviewer mentions that In bright light, the Nokia came close to competing with the detail from the best DLSR yet made ,

Comparing detail resolved, I’ll say the iPhone 5S currently sits 8-9 years behind the DLSRs in bright light, while the Nokia trails by less than 6 years — probably nearer to 3. This is even when you allow the DSLRs the luxury of a $1,700 lens, and shooting in raw. In bright light, the Nokia came close to competing with the detail from the best DLSR yet made.

Step into candlelight, and the gap between phones and DSLRs widens and becomes more a matter of taste, pivoting around your preferred tradeoff between speckly noise and smeary noise reduction. From our ad-hoc panel of 15 non-photographers, the iPhone trails the DSLRs by about 10 years, and the Nokia about 8.

The Nokia 1020 has redefined what I thought possible from a phone. I used to think of smartphones as a separate branch of ‘wannabe’ cameras, doomed to forever play catch-up with real cameras. I used to think like Takafumi Hongo, a Canon spokesperson who told the Wall Street Journal “Taking photos with smartphones and editing them with apps is like cooking with cheap ingredients and a lot of artificial flavoring. Using interchangeable [lens] cameras is like slow food cooked with natural, genuine ingredients.” He has a point. With a smartphone you’ll miss a lot of the joy of learning to cook traditionally. But in photography, the important ingredients come from you. Smartphones are now good enough not to need artificial flavoring from apps.

Click here to go to DPreview’s original article and reading the big comparison in detail. But to me it seems, Lumia 1020 has become savior of smartphone cameras when thrown against big bad DSLRs.