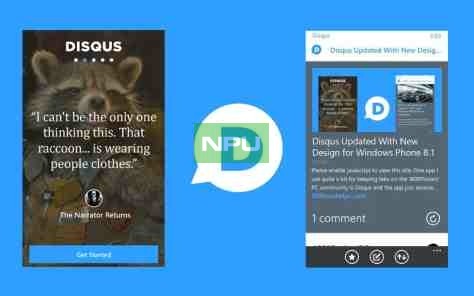 Disqus, a popular commenting service which allows you to comment on various blogs (including NPU) through one place (disqus.com) has announced the development of Universal Windows platform app for Windows 10 devices. Disqus has already a Windows phone app available in store. But now they want to take the advantage of UWP by releasing a universal app for Windows 10.

Ryan Valentin from Disqus team on twitter has announced that disqus Windows 10 universal app will available shorty for PC and mobile users in public beta.

The @disqus #Windows10 app is coming together quickly now pic.twitter.com/eJ5f3QIxtP

@Windows10Lover @disqus yep, will be on Mobile too

Moreover, Ryan has posted a screenshot of the app which provides you a slender idea of the app UI.

BTW you may download the current version disqus app for Windows Phone from below link.
Do our readers use Disqus app on their Windows Phone, let us know in comment section below.

Thanks Karan & Suni for the tip. Cheers!!