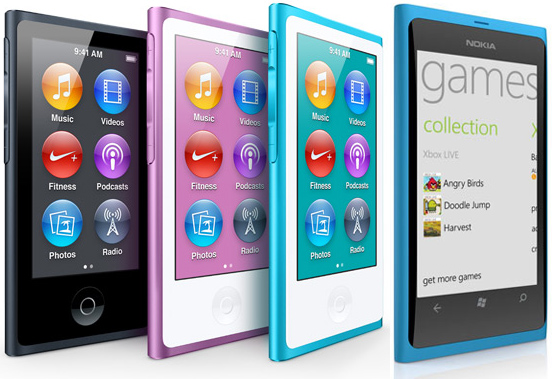 These kind of images and sarcastic comments are doing rounds since morning on Twitter and on different websites comparing just launched iPod Nano’s design with unibody Nokia N9/Lumia 800’s design . And, if you have a look  at the above photo, you will see lots of similarity between the two designs, and it seems as if Apple has copied Nokia N9’s design, after suing half of the world for copying iPhone’s generic design of rectangle with round edges.

Now, if you search more on the net, there are few Apple fans out there, who are claiming that even Nokia N9/Lumia 800 design is taken from old iPod’s design. But, something seems wrong here. Nokia launched N9 in 2011 and since then Apple never dared to even think about suing Nokia over the design of N9 and Lumia 800. And, just see how far they have gone against Samsung over Iphone’s design copy. So, can you guess the reason?

Let us have a look at design patent for a Nokia Handset which Nokia filed in Mar 2011, just after launch of Nokia N9. It has been granted this patent on January 2012. So, Nokia certainly has all the rights to sue, if anyone uses this design in making a “Handset” without Nokia’s consent. So, either this patent wouldn’t apply to “Audio/Multimedia devices” or we can see Nokia bringing litigation against Apple in near future.