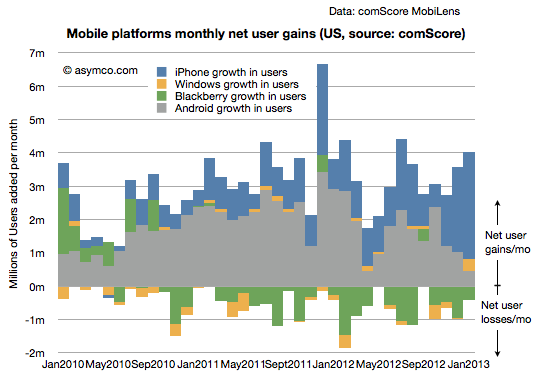 This may be best indicator to the fact that not only in European countries like UK but in US also Windows Phone may be the upcoming threat to Android. The above chart has been tweeted by @Asymco and retweeted  by @joebelfiore from MS. According to latest Comscore data, Windows Phone has gained nearly same number of users as Android in US market in the same period. This data has been taken from “Comscore’s latest data for last three months ending January.

Also, now the installed base of Windows phone users in US is reportedly 4 million at 3.1% according to Comscore, which is nearly same as reported by “Kantar” at 3.2%. Only difference was that Comscore has always included MS’s earlier OS “Windows Mobile” users with Windows Phone and thus use to report reducing WP% in US, while Kantar always reported increase in WP% as it reports only “Windows Phone” users.

Again, it is good news for Nokia’s WP8 ambitions in important market like US. With onset of Flagships at T-Mobile and Verizon and introduction of budget Lumia 521 at T-Mobile, it must get better from here.