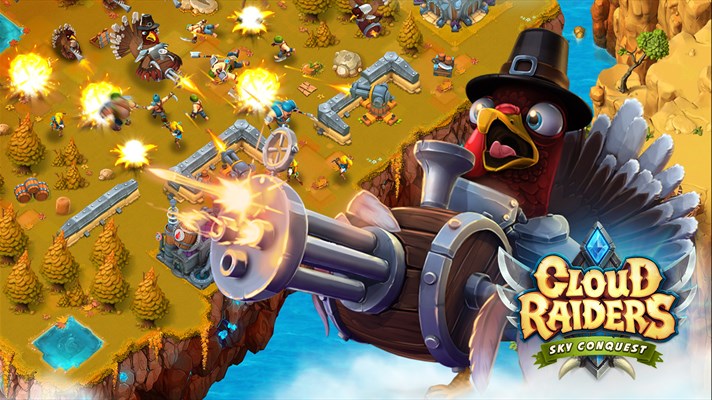 Cloud Raiders for Windows Phone received a new update to version 0.7.5.750. The latest update for game brings lots new features and improvement. For those who don’t know Cloud Raiders is action strategy game with lots of features.

Changelog available in the store:

– Turkinator is here! – Battle the Leftover Legion, lead by the mighty Turkinator! His ferocious flock will leave your base in ruins!

– Thanksgiving Chest – Available for a limited time, claim the offer of a lifetime with unique never before seen items!

Version 7.0 is here! Stronghold 10, a new troop type, towers and a few surprises along the way:

* Stronghold Level 10: The floodgates are open! Upgrade your Stronghold to level 10 before anyone else and enjoy a whole new set of deadly contraptions! Dragon Tower, Poison Barrels, the indomitable Gauntlet and dozens of dangerous upgrades await! Put those clouds to good use, Captain.

* Gauntlet : The strangest troop to arrive in the clouds yet… immense damage, incredible toughness and a strange charisma makes him one of the most dangerous troops ever to set foot on the airborne archipelago!

* Dragon Tower: The Builders Guild™ has cooked up a fire-breathing, lava-spewing bbq-grilling tower. It takes a while to warm up, but the damage output is colossal. Also doubles as a hog-grill for summertime troop rallies.

* Poison Barrel: Drop this barrel to create a pool of deadly poison on the battlefield. Anyone stepping in it will receive continuous poison damage!