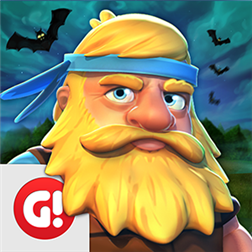 Time for some new updates.

Cars: Fast as Lightning has been updated with some bug fixes, it seems. There is no changelog, however. Install it from the below link.

Cloud Raiders  has been updated with major Halloween update.

* The Flying Dutchman Challenge – One of the greatest enemies of the living has targeted your base to begin the Soul Harvest! Defend yourself from swarms of zombies and fight the ghost crew! Battle the forces of the underworld for 4 weeks, facing off with a new boss each week!
* Haunted Island Skin – The Kraken is back! And this time he stole a cursed map that unlocks an exclusive island skin for your base: The Haunted Island. Available for a limited time, this skin is sure to intimidate any would-be raiders.
* Tiered Leaderboards – The Valor Challenge has been broken up into mastery tiers to feature players with a similar base strength. Now even less-experienced players will have the chance to show their grit!
* Exclusive Halloween buffs and potions! – During the event, you can earn and buy unique halloween items. Increase the speed of your troops, boost the firing rate of your cannons to destroy the zombie hoards, and lure your troops into following orders with Candy Barrels!
* Misc fixes and Improvements