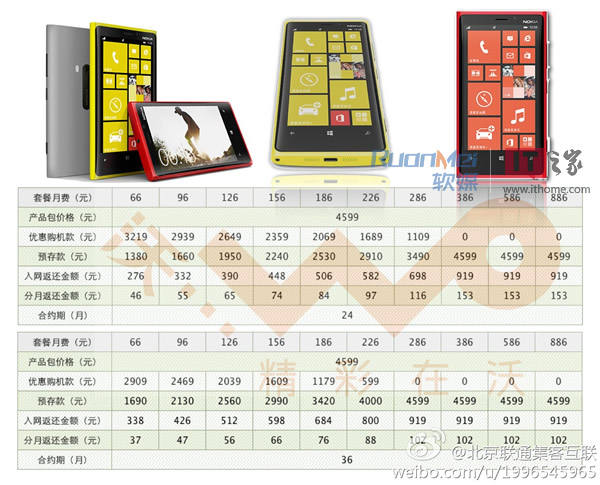 Great news coming for China!! After China Mobile’s on-contract price revealation for Lumia 920T, now China Unicom has also revealed on-contract subsidized pricing for Lumia 920. As can be seen in the above chart, Lumia 920 can be had for free on,

These plans even look better than earlier announced China Mobile’s plans, which start from 1 Yuan on a monthly rental of 388 Yuan for 2 year contract.

If these aggressively competing plans  from World’s no. 1 (China Mobile) and no. 3 (China Unicom) operators are some indication, Chinese buyers are in for a big treat. Hmmm, thinking in terms of USA market, it is as if AT&T and Verizon have got Lumia 920 from the start and competing with aggressive plans (can happen in some parallel universe now).

Considering the fact that both unsubsidized Lumia 920 and Lumia 920T are doing so well in China in terms of sales, the subsidized prices from both “China Mobile” and “China Unicom” may give really huge boost to Lumia numbers in Q1 2013.