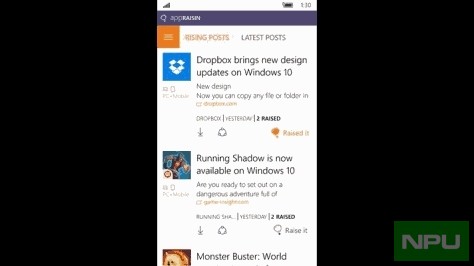 AppRaisin app today scored a new update in Windows store. The latest update doesn’t pack with any new feature (as they recently stopped active development) but it includes some important bug fixes. Developers has fixed a bug where articles dates get incorrectly displayed. They also fixed crashing bug in app where it crashes while navigating between app pages. Below is full change log.

I really think that AppRaisin is good startup from AD duplex which really improves the attachment between the Windows users around the world. And with every single small-big news the users get updated through that. So it’s basically a good platform by which Windows users can interact with each other and share ideas about apps, games and other “Windows” things. So I think everyone should take advantage of it. So make sure that you hit following link to download the updated app and can join the big community of Windows users.
[appbox windowsstore 9nblggh5x358]