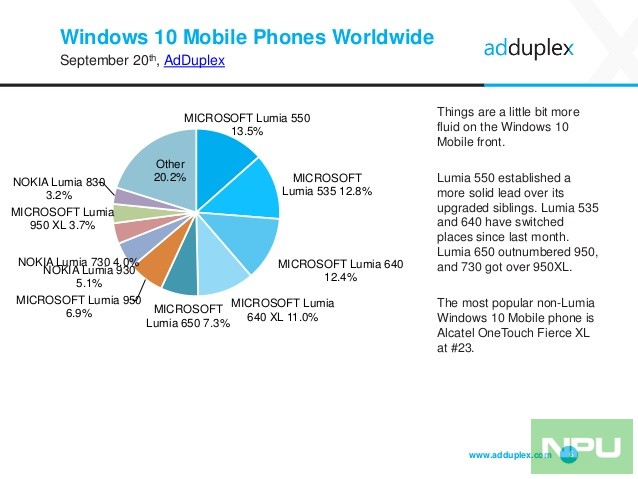 AdDuplex has released its Windows Phone / Windows 10 devices report for September 2016. For your information AdDuplex gathers, analyses and releases Windows Phone and Windows devices market share report every month. Here is how the report was generated.

This report is based on data collected from around 5,000 Windows phone apps running AdDuplex SDK v.2 (and higher). The raw data analyzed was collected over the day of September 20th, 2016 (UTC time) unless otherwise stated. We have made every attempt to consolidate different reported phone model names under their canonical retail model names, but it is possible that some of the rare model name variations were not accounted for. AdDuplex is the largest cross-promotion network for Windows Phone and Windows Store apps and games empowering developers and publishers to promote their apps for free by helping each other. AdDuplex was established in January 2011 in Vilnius, Lithuania. As of September 2016, more than 10,000 apps actively use AdDuplex to gain more visibility.

Windows 10 Mobile growth has stagnated. All thanks to no new devices from Microsoft and exclusion of most of Windows Phone 8 devices from upgrade eligibility list.

Coming to Windows 10 PC manufacturers, HP is still the top vendor followed by Dell and Lenovo.