Skip to content
You are here
Home > Latest Posts > News > WP7 devices to get the new cool features of Facebook Beta via update. 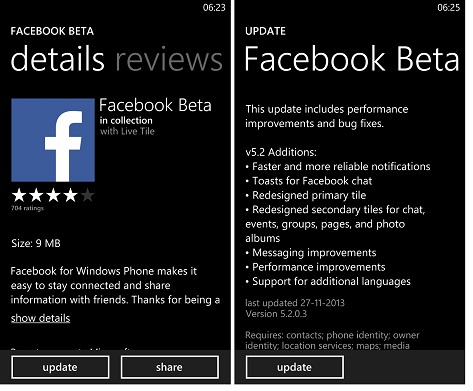 To assuage concerns of Windows Phone 7.5 device owners, Joe Belfiore has tweeted saying that the features which we have seen in latest Facebook Beta will come to the WP7 devices via Facebook update.

Folks asking about new #Facebook beta and #WP7: yes, there will be a #FB update for #WP7 users that incorporates stuff in the recent beta.

For your information, the latest Facebook Beta brings some really cool live tiles and improvement in reliability of toast notifications. I have been using the latest Facebook Beta on my Lumia 925 and I am really impressed with all the improvements I can notice. While, the Facebook Live Tiles now shows more detailed information, one can even pin the Facebook pages one administers to home screen as Live Tile. Apart from that, toast notifications really work well for the very first time.