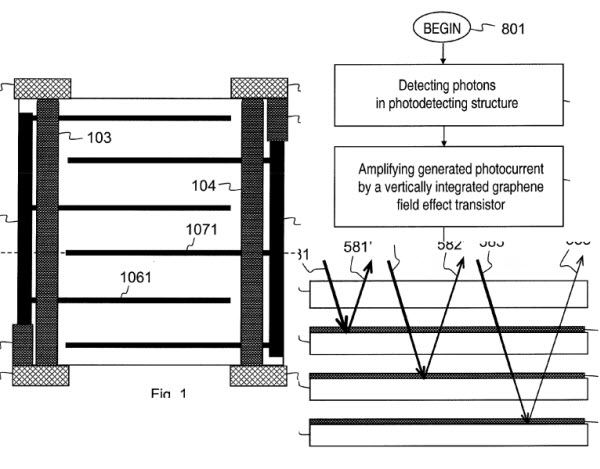 This one is very interesting given Nokia’s position and thrust as Smartphone imaging leader. Seems that Nokia is working for reducing the sensor size for its device cameras and it is natural given the size of hump seen on 808 PureView and N8 earlier.

Nokia has filed a patent for “Graphene based photo sensors” which can be made much thinner than currently used traditional CMOS sensors. Also, the sensor manufacturing process itself should be more simple then current CMOS production, and it will use cheaper materials.

The patent describes photo-detector/pixel with graphene photon collecting layer, a number of finger shaped electrodes placed above it to collect electrons-holes generated by passing light photons, a graphene nano-ribbon acting as field effect transistor to amplify the resulting current and transfer it to the connected control electronics. Several light detecting and amplifier layers can be stacked on top of  each other, with color filters in between, so different colors can easily be detected by each pixel in the sensor.

But for now, it seems, compared to advanced CMOS, Graphene sensors still lack enough photo responsivness and generate too much noise for practical applications. So, that’s why it seems Nokia R&D is still working and we haven’t yet seen Graphene sensor out in devices.

But, given the level of interest in Graphene as a versatile material, it doesn’t seen much far away. Anyways, if it comes true in future then having a 41 MP PureView Camera in a N9/Lumia 800 like unibody design will certainly  be the “Killer” combo 🙂