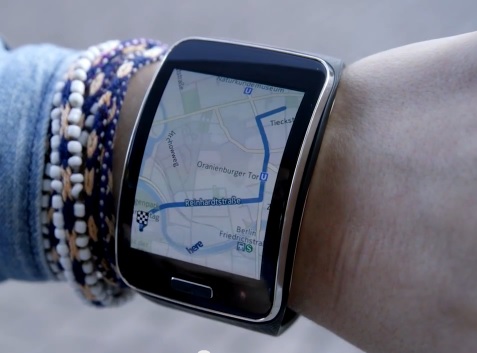 We have earlier seen HERE for Gear (HERE for smartwatches) in brief action or just in images. Now, HERE has posted a detailed video of showing HERE for Gear in hands-on action on a Samsung Gear S. How we wish it could have been a Nokia smartwatch. Anyways, HERE for Gear app that is also called Navigator comes with same offline capabilities similar to its Android and Windows Phone brethren.

Samsung Gear S can work independently of your phone, with its own downloadable maps, navigation and live transit times. So there’s no need to pull your phone out every time you need to check for the next turn.

It’s designed to make the information glanceable, so you know where you’re going with only a simple, natural glance at your wrist. Wearable apps are intentionally made to be very much less demanding of your attention than a smartphone.

Alternatively, using the smartwatch in conjunction with a Samsung Galaxy smartphone, you can plan a route on the phone, with the large screen making it easy to see the bigger picture, then simply send the route to your Gear S, where it can look after the turn-by-turn instructions.