Skip to content
You are here
Home > Latest Posts > News > Voice activation for Cortana teased. To have British accent in UK. Cortana could have been named Alyx. 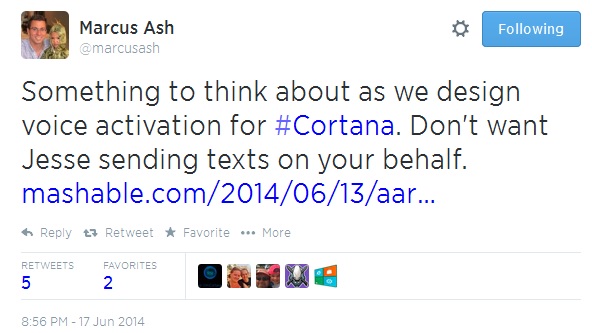 Something to think about as we design voice activation for #Cortana. Don’t want Jesse sending texts on your behalf. http://t.co/Vq4uXB0P6q

Marcus has also mentioned that Cortana which is coming to UK soon, will have British accent.

An interesting revelation by Marcus puts Alyx as one of the most probable names for the digital assistant, before WP community feedback forced them to name it as Cortana.

@klxz79 @XCoNOMICRON @joebelfiore We had a list of names. One early front runner was Alyx. Thanks again WP community for weighing in 🙂