Skip to content
You are here
Home > Latest Posts > Video maker gets his video stolen by #Apple. #Nokia empathizes and sends a note & #Lumia 1020 to him. 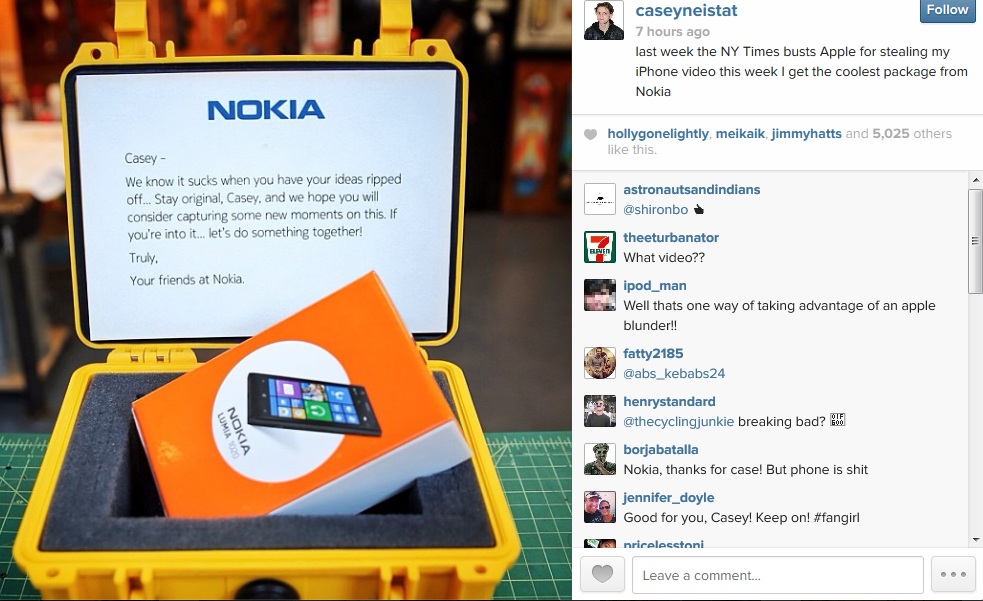 Well, this is epic!! Casey Neistat, who makes videos on YouTube gets one of his video stolen by Apple’s customer care for internal circulation as a motivational tool. This gets busted by NYTimes and obviously not liked by Casey who is a long time Apple fan,

It may be true that imitation is the sincerest form of flattery. But a popular filmmaker in New York was not flattered when he learned that part of his movie had been recut and used as a motivational video for Apple employees.

The video, “The Dark Side of the iPhone 5S Lines,” was a lighthearted documentary by Casey Neistat on the pains people endured while waiting in line for the new iPhone 5S. One woman in the film, for example, wrapped herself in a garbage bag to stay warm while sleeping on the ground. The video has had more than three million views on YouTube.

Now, Nokia has empathized with Casey sending a note and Lumia 1020. The note mentions,

Obviously Nokia has not liked Apple copying many ideas from Nokia including colored profiles and low-light imaging.

last week Apple steals my iPhone video http://t.co/IcviJdazy3 this week i get this radical package from Nokia –> http://t.co/VrSppbBDqI

You can watch the copied video from Apple by clicking here.