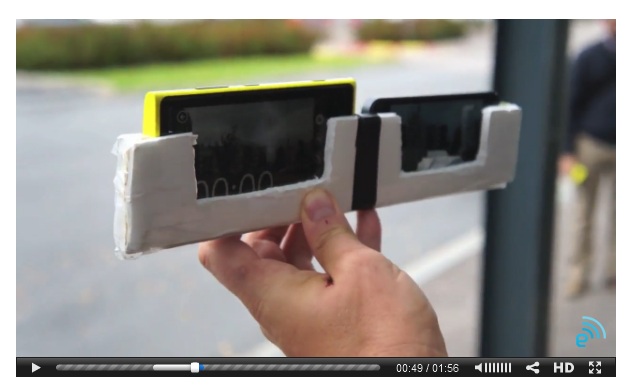 This makes for a great first post on a day. Yup, fellas at Engadget, who are paying a visit to Nokia House in Finland, have got hold of Lumia 920’s latest prototype and have done a proper video capture test with none other than iPhone 5. Now we know, iPhone 4S and iPhone 5 are reportedly one of the best video capturing camera smartphones out there and it is “the” test to decide whether much talked about OIS on Lumia 920 is really paying off.

Myriam from Engadget has conducted the test by holding both the devices together and she says Lumia 920 captures significantly smoother video than iPhone 5 and we say Wow!!

As expected, the Nokia phone was able to capture far smoother video than what we snapped with the iPhone, with both devices secured side-by-side in a homemade foam holster. Unlike our handheld interview shoot earlier today, we pushed the limits a bit further this time, running through Nokia’s parking lot and turning every which way as well.

If you ask us, not only video by Lumia 920 is much smoother but colors in iPhone 5 video look washed out and clarity wise also Lumia 920 wins hands down.

Check the shootout video below,

Update: Engadget has updated the shootout with Galaxy S III and One X vs Lumia 920 comparisons. Results remain the same, Lumia 920 smokes everything else with the amazing OIS capability.