Skip to content
You are here
Home > Latest Posts > Updated: May be close to 11%. Lumia 520 propels Nokia to its highest smartphone market share in UK since April 2011. 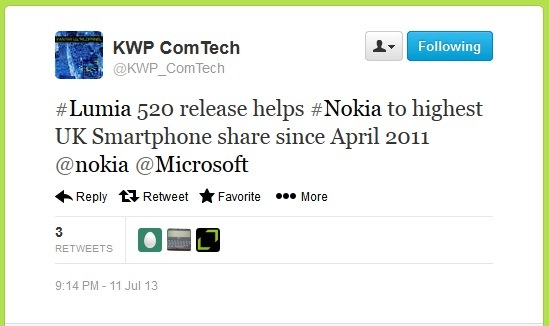 One of our reader Briso (check in comments) has shared an old KWP report from April 2011 with us, which mentions that Nokia (Symbian) had 11.4% of UK market share in March 2011 and also we managed to find a report which mentions that by June 2011, Symbian slided to 10.7% in UK.

So, it is clear that Nokia now has close to 11% of UK smartphone market share. Comeback time!!

This one is from KantarWorldpanel. They tweeted last night that with Lumia 520 release, Nokia has managed to climb to its highest market share in UK since April 2011. Though they haven’t shared how much market share Nokia has now in UK and we have reached out to them.