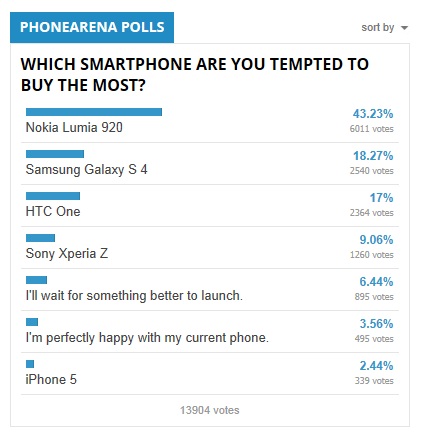 Finally, PhoneArena has corrected the poll data and it looks much more realistic now with total 13904 votes !! Great news is that Lumia 920 is still the preferred choice of voters and is leading with 43 % votes now leaving the SGS 4 at second place.

This is totally mind-blowing and even to certain extent unbelievable result of a poll !! After Samsung has just revealed its new Flagship SGS 4, PhoneArena has conducted a poll asking about, “Now that the Samsung Galaxy S 4 is official, which high-end smartphone would you buy?” Contenders are HTC One, SGS 4, Lumia 920 and iPhone 5. And surprisingly no Nokia/WP blog including us has reported this as per our information goes !! So, when you vote and see the results, Lumia 920 obliterates all others with 97.9% votes :P. Now, we certainly don’t know how and what of the results. Let us wait for what PhoneArena has to say about this.

In the meantime you can check the poll here.