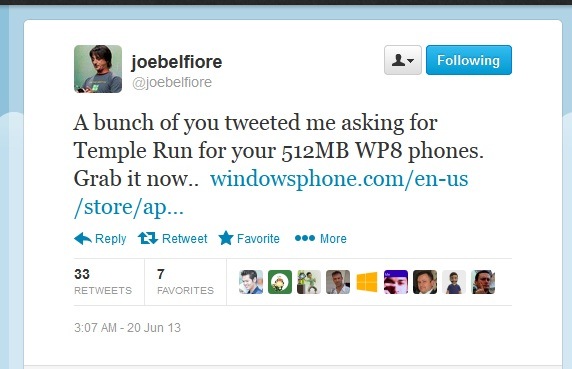 Seems many of our readers are facing issues with installing the updated “Temple Run” on their 512 MB RAM Lumias. Don’t know, why MS can’t sort out these annoying misses beforehand!!

Joe Belfiore from MS tweeted saying that “Temple Run” will be available for WP8 devices with only 512 MB RAM. This is a very welcome development and may indicate that other apps and games which are not able to run now on 512 MB devices may do so in future. Temple Run has been one of those titles which give a certain depth to WP apps eco-system. Not being available on 512 MB devices would have made majority of future Lumia WP8 owners not able to run it, considering the traction likes of Lumia 520, 620 and 720 are getting.

Install it by following below link for free,

Joe also let you know that MS uses same service they use to push updates for Windows PCs for WP updates as well. He has tweeted a series of tweets on this.

For those of you who asked… MS publishes and distributes WP updates via the same service we use to push updates for Windows PCs.

I’m stating a technical fact: all WP updates (whether created by OEMs or MS) are distributed by MS via our Windows Update service.

It’s been this way since WP7 launched.