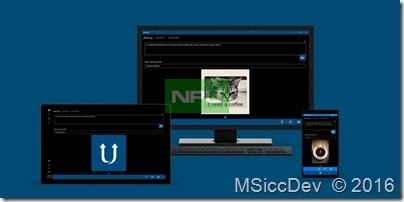 Unishare, an app by which you can post an update/status to multiple social networking site like on twitter, facebook though one click.
Today MSiccDev, a developer behind Unishare app has announced it’s Universal Windows Platform version of the app for Windows 10 users with the full support for Continuum feature. With this big step, developer has also implemented some novel features too in app. Check out full app features below.

App Features.
• Share easily across up to 10 networks (with more to come!)
• Supported networks in Basic version: Twitter (single account, LinkedIn, Facebook (personal account))
• Supported networks in Pro version: Twitter (up to 3 accounts, LinkedIn, Facebook (personal account plus pages you are admin/contributer), Tumblr, Pocket (saving links for later), Geeklist, Path, Slack (up to 5 teams), Reddit, vk.com
• Choose from a broad range of picture upload packages (from 5 pics for free up to unlimited)
• Create and use sharing profiles to easily target the right audience for your content
• Mentioning of users you are following on Twitter, your Facebook friends or team members on Slack
• Shorten links with Bit.ly, using your existing account to enable statistics
• Share pictures to networks that do not support direkt image upload like LinkedIn and Reddit, using imgur.com
• Our UserVoice is built in for faq, your suggestions and also support tickets
• Many more features to come with future updates, including translation to more languages.

Everyone should get a chance to explore app for that developer is making available Sale until end of June on Pro version.

In the same timespan, we will also randomly post codes for 1 Year-Pro subscriptions on Twitter and on Facebook, make sure you are following us to not miss your chance to snag one for free!

So I think developer is really wants you to try this Universal version of the app and help them to make it more better through your valuable feedback. Make sure that you hit following link to grab this app from store.