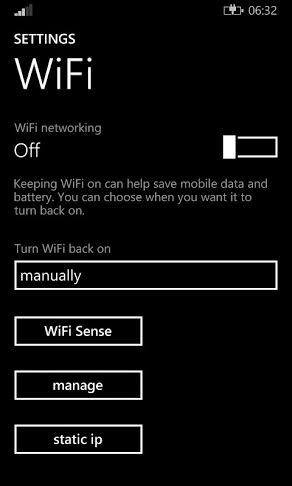 The developers preview running devices which are now updating to Lumia Cyan are also receiving the Static IP support and management settings. I can confirm this for many devices now, including my Lumia 525 and Lumia 630, both of which received Lumia Cyan along with the latest Windows Phone 8.1 update 1 version recently.

The latest Lumia firmware update, which we exclusively reported about yesterday, seems to bring something many of you have asked and were waiting for. As can be seen in the screenshots sent to us, the update adds “static ip” settings management.

One can go to Setting—–>WiFi—->static ip and tap on it. The next screen allows one to enter static ip related values. This is mighty helpful feature for especially the enterprise customers.

Surprisingly this update rolled out to only Lumia 625 devices yesterday and it is available for both Windows Phone 8.1 and Windows Phone 8.1 update 1 running devices. So, may be it will roll out to other devices soon. We have earlier reported about Static ip settings support arrival with Windows Phone 8.1, but obviously manufacturers need to enable it with firmware updates.