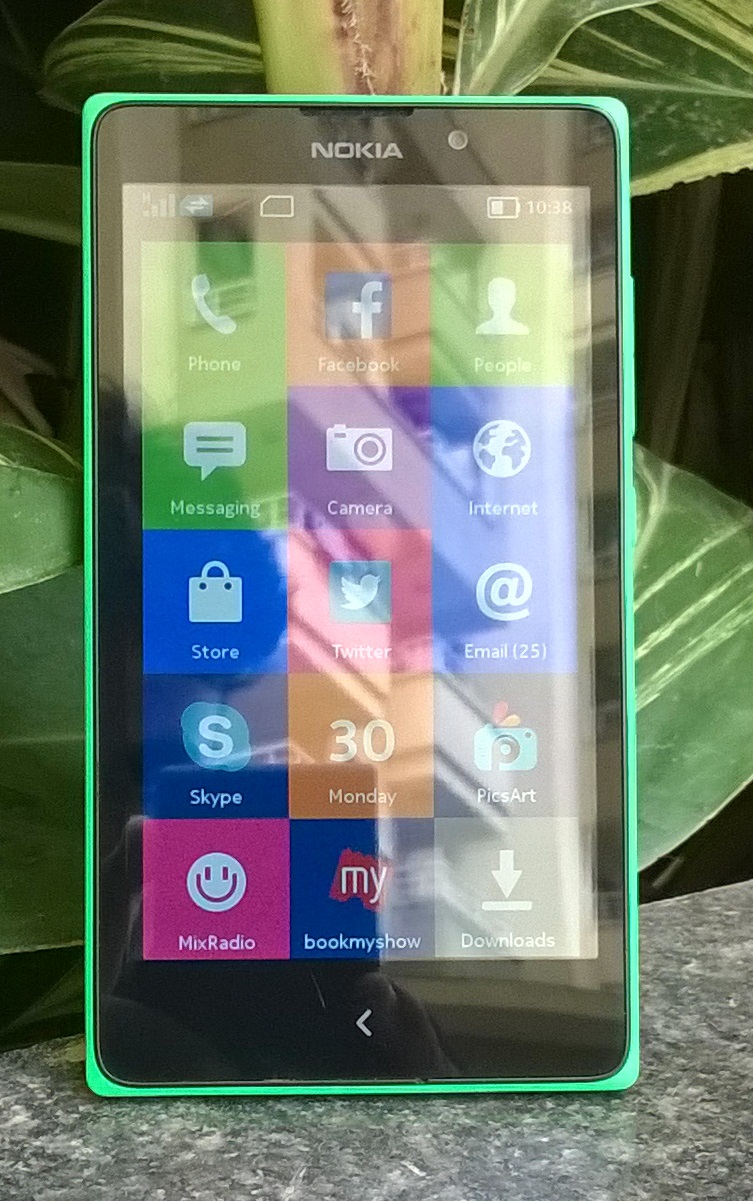 Nokia XL is the smartphone with largest display (5 inch) in the range of devices, running Android (AOSP) based Nokia X OS. We received this device some one month back and as per NPU’s tradition, we don’t rush to write reviews just on the basis of 2-3 days of use like many other sites. This Nokia XL review is based on use of Nokia XL as my daily driver for last one month.

Design wise, it resembles pretty well to its smaller sized sibling Nokia X, which has both influence of colorful Lumia range, and some design genes from Asha 5XX. It looks well-built and beautifully designed. It gives a feel of robustness and reliability when you hold it in your hand, though feel a bit heavier to some.

Coming to the one of major selling points of the device, the 5-inch, 480p display, it is a very bright display and has good color contrast. The tile shaped icons look really beautiful on this display, which has some issue with finger-prints, which make It look dull at time, especially if your palm is sweaty. Surprisingly, it has one of the best outdoor visibility amongst the devices of its price range.

You may like to watch our Nokia XL display test with Gaming and Video watching hands-on below,

The Nokia XL comes with Nokia X OS which is based on Android (AOSP) and has Swipe UI seen on Asha 5XX range, only much enhanced. Fastlane is much capable and it shows all apps updates and notifications and mind you the notification support on Nokia XL is very reliable. The other homescreen has all the apps shaped as re-sizable tiles, that can be arranged in Folders, too. There is option of changing color of 3rd party apps’ tiles, which may be a welcome addition on Windows Phone as well. You can watch our UI hands-on in the video. This UI really keeps even first-time smartphone users at ease, due to its simplicity.

Nokia XL shines when it comes to apps availability, because of its Android roots. Nokia store along with 3rd party stores cater to apps and games needs of users efficiently and nearly all the top free Android apps are available for Nokia XL. You can check our video to see 10 top Android apps from Google Play on Nokia X.

Nokia has packed Nokia XL with fully-featured HERE Maps with offline support and it provides great user navigation experience like always. Nokia MixRadio is one of the best free music streaming app with great music listening experience and it again comes with offline mixes as well. OneDrive which comes with 15 GB free storage from Microsoft (in case you back up your camera roll) is very well integrated and the app comes with functional and feature-packed UI. You can take a deep dive in various native apps’ UI by watching our hands-on video.

Nokia XL packs a 5 MP auto-focus Nokia camera with flash and as per your testing it is a pretty good camera in its price range. We compared it with Lumia 525’s 5 MP auto-focus camera and here is what we could conclude,

In daylight, Nokia XL camera may appeal more to many due to added sharpness, but Lumia 525 keeps the natural look of the image. It boils down to one’s taste as there is not much difference here. in low-light imaging, if we consider the flash, Nokia XL has advantage in many cases where one really needs to fire the flash. In low-light without flash, Lumia 525 has brighter image, but again Nokia XL is no slouch and provides well detailed image.

You may like to read the comparison in full by clicking here.

It also packs a 2 MP FFC for video calling apps like Skype and Selfies. The FFC also has decent image quality.

The native Nokia Browser on Nokia XL renders webpages really fast and offers a good browsing experience with tabs, favorites, password manager and history settings. Though, one can also download browsers like Opera and UC browser from app stores, and you can also set any of them for opening web links from any application.

The multitasking on Nokia XL is more like iOS and Windows Phone than Android. So, while some background processes are always on and you keep on getting push notifications from apps like Facebook, Twitter, Mail, some Games etc, consistently, most of the apps get suspended when sent to background and fast resume from the suspended state on reopening. Though, downloads, apps installations, music play etc work fine in background and one can see them happening in real time in Fastlane and even control them.

Nokia XL has a different UI than what we usually see on other Nokia smartphones and it may be liked by many. The music output is good quality and speakers are loud, in fact speakers and music output quality let Nokia XL score some extra points. Video playback is also smooth but is limited up to 480p videos playback only. So, you won’t be able to play videos in 720P res or higher on Nokia XL, a limitation which we think Nokia should do something about.

For a heavy usage, with many mail boxes syncing, lot of push notifications and moderate to heavy browser use, Nokia XL battery lasts 32-36 hours. So, for moderate use it may be able to last for 4-5 hours more.

Nokia XL is a good option for someone looking for a quality Nokia smartphone with big display on budget. When compared to similarly priced Lumia 630 in India, it comes on top with camera with flash, 2 MP FFC, bigger display and some advantage in apps and games availability with games like “Candy crush saga” yet not available for Lumia range. Lumia 630 however score higher in terms of fluid user experience, something which is valid even when compared to even high-end Android devices.

Nokia XL has also lost bit of a sheen with introduction of Nokia X2, which brings lots of improvements software and hardware (processor) wise. It comes packed with a new version of Nokia X OS termed as “Nokia X software platform 2.0″. The new version has many useful enhancements like “Multitasking view”, enhanced pull-down bar, new Camera UI. The bad news is that Nokia XL will not get Nokia X Software Platform 2.0. Nokia X2 however comes with a display size of 4.3 inch giving Nokia XL advantage in terms of display real-estate.