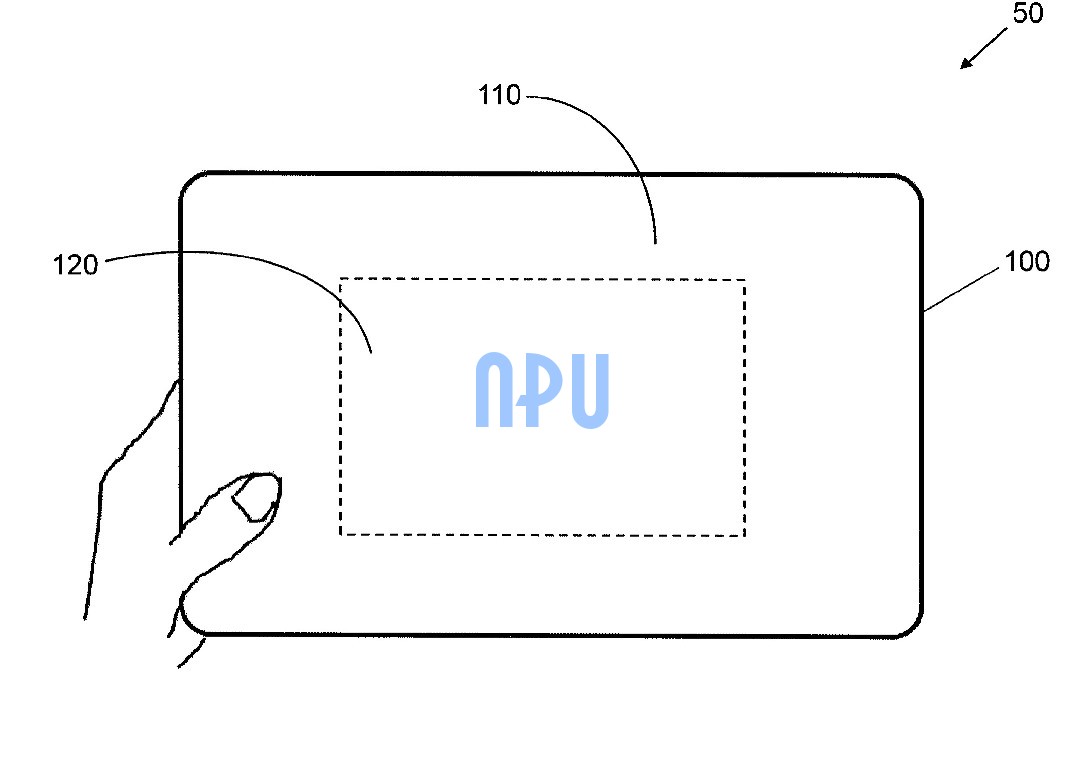 A recent Nokia patent reveals that Lumia smartphone and Tablets may have active Bezels in future. Bezels are top and bottom and surrounding perimeter area in tablets, which house hardware buttons, FFC, sensor and exist for easy handling of these touch display devices in hand without actually touching the active display. Though, since they are inactive part of device’s screen, they have an impact on touchable screen real-state. With time Bezels are getting smaller and smaller, but there is certainly a limit to this.

To facilitate the user’s handling of a mobile device, such as a tablet or a cellular telephone, bezels are provided around a perimeter of the display. The bezel may be, for example, a visible rim or an edge of the display that allows the user to hold the device without inadvertently applying touch inputs to the display. The bezel may, in some cases, hold hardware buttons, house a camera, or simply provide an area that the user can hold without accidentally interacting with the displayed content. The presence of the bezel, however, diminishes the usable area of the display and, thus, further decreases the display real estate, making the viewing of certain content on the display more difficult in many cases.

The patent in question aims to tackle the question of how to have maximize touch-sensitive active display area on smartphone or Tablet even with Bezels. What better than making Bezels active themselves. But won’t that lead to issues in handling? The patent proposes that Bezels become active only after detecting a certain amount of active force.

A force component of the touch input may be detected and compared to a predetermined force threshold. In cases in which the force component of the touch input exceeds the predetermined force threshold, user interaction with the content at that location may be enabled. In this way, the force exerted by the user in applying a touch input in the bezel area may be considered an indication of the user’s intent to interact with corresponding content within the bezel, and such interactions may be provided for accordingly.

The Bezel (inactive area) may be decided based on “how the device is being used” and with the input force will become active and inactive as soon as that force is removed.

Accordingly, embodiments of an apparatus, method, and computer program product are described that provide for an active digital bezel area on a display of a device in instances in which the bezel is determined to be needed, where the configuration of the bezel area is determined so as to enhance the user’s interaction with the device display based on how the user is currently using the device.

Additionally or alternatively, the at least one memory and the computer program code may be configured to, with the processor, cause the apparatus to disable user interaction with the content at the location corresponding to the location of the touch input upon expiration of a predetermined amount of time following enablement of the user interaction. In such cases, the predetermined amount of time may correspond to the force component of the touch input.

The devices may indicate visually or with help of haptic feedback that Bezel portion has become active.

Moreover, the method and computer program product may provide for a visual indication or a haptic indication of the enablement of user interaction with the content.

You can read many such Nokia innovations by clicking here and remember NPU’s innovations / Science category is the best source for such fresh innovation related news from house of Nokia.