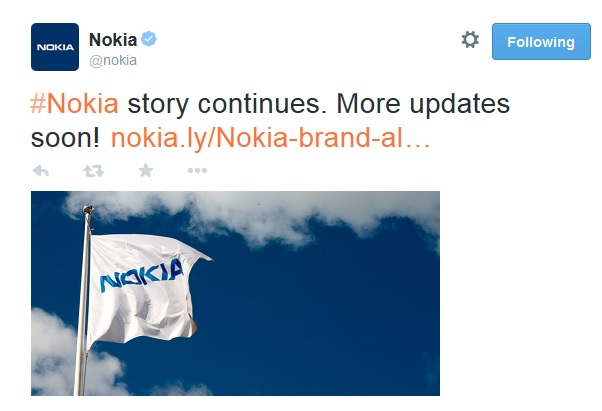 We just reported about Nokia assessing re-entry into world of mobile phones and devices, once the Microsoft-Nokia agreement, that stops Nokia from pursuing smartphone in near-future, is over. Now, Nokia Twitter account has teased “Nokia story continues” and asks to stay tuned as “More updates soon”. The tweet also features the link to earlier Nokia post in reply to misleading reports of “Nokia brand getting killed”.

Things are really moving fast now and most of us Nokia fans want Nokia back in the mobile phone game. While many wonder about feasibility of such decision given Nokia’s D&S division and all resources are now with Microsoft. But you may like to read how Nokia has already moved some key people to a new team, before the deal was officially announced. You can read more here.

It seems Nokia had started planning for impending Nokia-Microsoft deal in advance by shifting some of its top designers and highly-skilled team from D&S division to emerging devices team in CTO office. This team never existed in past, so it is easy to assume that it was a vehicle to retain the talented few with Nokia and the team had names like Peter Skillman, Hans Peter Brondmo, and Axel Meyer. Now all of them are part of HERE. Similarly, many joined Nokia Technologies team too.

We will analyze the situation with some input from our sources soon, but it seems Nokia management has made up its mind and Android is the way!