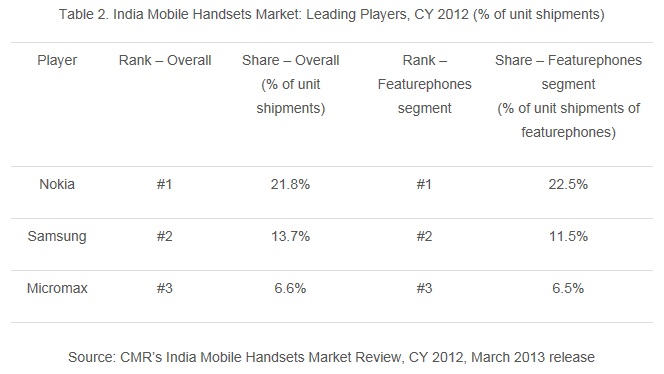 India still being the Featurephones dominated market, only 15.2 million smartphones were shipped in year 2012. Nokia was second largest smartphone player with 13.7% share, which is still good considering Lumia WP8 devices were launched only in January 2013. In case of featurephones, Nokia has shipped 22.8% of overall featurephone units shipped in 2012.

Further, it seems Featurephones have grown by 20% and smartphones registered nearly 35% of Y-O-Y growth. Hence, even in 2013 India will see majority of mobile handset shipments belonging to featurephone category, but smartphone may see their overall percentage of total shipment growing!! This is where low-end smartphone like Lumia 520 and Lumia 620 become important for Nokia, considering price sensitivity of Indian market.