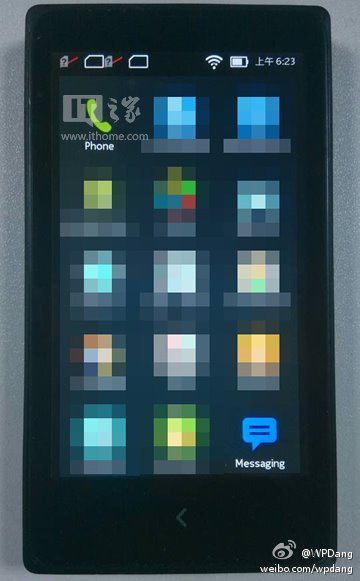 Nokia’s Android phone known as Nokia Normandy aka RM-980 is not dead yet and Nokia may have put it on its release path already has been asserted by evleaks and our own sources.

Leaks of the first Nokia with Android doesn’t seems to stop and now a prototype has been leaked in China giving a blurry glimpse of the UI. One can only see the messaging icon clearly and the messaging icon looks quite different from what we see on Asha 5XX series and looks “Androidesque”.

Nokia logo is missing from the prototype but it matches well to earlier leaked press images and also that “Back” key reveals its “Asha” family roots. One more noteworthy thing is that source claims it to come with dual-sim, dual-standby feature, a departure from earlier Ashas and similar to first dual-sim Lumia, the Lumia 630.