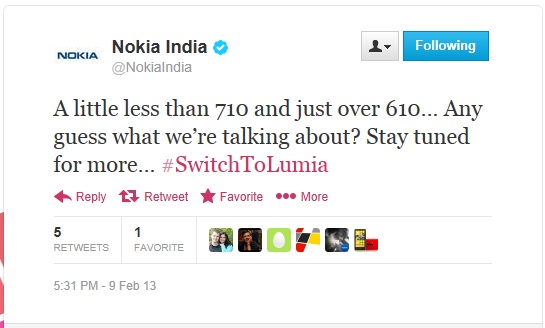 So, what will you do If you are Nokia and people are excited like crazy about your certain phone. If you are Nokia, then you will kill the excitement with longer than expected wait and turn it into frustration :P. That’s what has happened in case of Lumia 620 in India. We have seen Lumia 920 and 820 getting strong traction everywhere and for a price sensitive market like India, Lumia 620 is like a godsend fully packed Nokia quality device !! So, many Nokia fans are eagerly waiting for Lumia 620 to arrive (now utterly frustrated).

Anyways, good news is that now Nokia India has woken up from slumber and have posted a teaser on its Twitter account, which says,

A little less than 710 and just over 610… Any guess what we’re talking about? Stay tuned for more… #SwitchToLumia.

So, it seems Lumia 620 may be heading to the stores soon,  finally. Just hope it is sooner than later !!