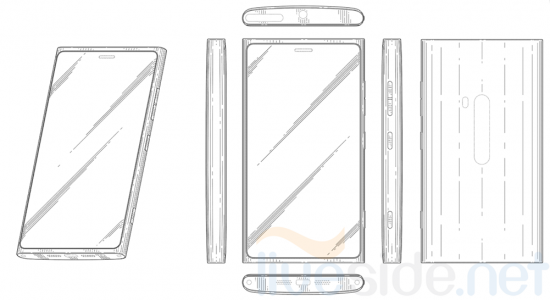 A Nokia design patent filing has revealed a new device design, which has the potential of being an upcoming WP8 device, and the design is very much similar to Lumia 800 and 900’s design. But upon closer inspection you can notice some differences and most interestingly, it matches to the previous leaked images of the Yellow  NOkia Phi.

Some other noteworthy things from the patented design are reported as,

Dual speakers are on the bottom, a change from the single speaker grill of the Lumia 800 and 900. Of course phones often use ‘faux’ speaker grills for added parity in design so it will be interesting to see if these grills are actually for dual speakers or not. Knowing Nokia, we wouldn’t put it past them to have a fantastic sound system on this flagship phone.

Button layout appears to be the same as the Lumia 900 with all keys on the right hand side, although spacing does look to be greater here with the camera button pushed further down and what appears to be a slightly larger ‘gap’ between the power and volume controls.

Rounding out the design sheet is a micro USB connector on the bottom, right in the middle with a 3.5mm headphone jack its polar opposite on top. In addition what appears to be a dual microSIM/microSD card tray is present on the upper left corner of the device—it would make sense to have this as a single drawer to reduce costs and for design simplicity.

So, do let us know in comments what you think about this patented design ?