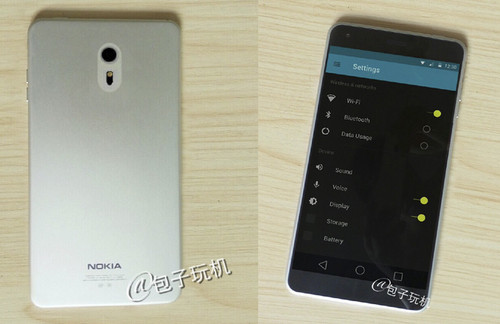 Well, it is not a real deal!! As per our sources it is not what Nokia is designing for its smartphone foray in 2016, neither it is a old prototype, as the cancelled Nokia Android flagship desgin was quite different. So, it is mostly a fan made intelligent photoshop.

Now this gets super interesting!! A device has leaked in real-life images, bearing Nokia brand name and matches quite a bit with the Nokia C1 leaked renders we saw days back. As per the leak it will have 5-inch, 1080p resolution display and may run on Intel Atom processor. In the image above it is supposedly running Android’s next version Android 6.0 Marshmallow. It may have 2 GB RAM and as per the renders leaked before may be made of metal and will be super-slim.

Nokia has made it very clear by releasing a press statement that it can return to smartphones only in 2016. CEO Rajeev Suri has also confirmed that Nokia will be back to smartphones once the agreement with Microsoft is over in Q4 2016. We even broke the exclusive news that It will be Foxconn again that may get honors to launch first Nokia-branded smartphones next year.

We are in touch with our sources about the above device but we remember a tip about Microsoft cancelling a Nokia made Android flagship just after the deal. It was supposed to be similar to Nokia C7 in design. May be we are having a look at the leaked and cancelled Nokia Android Flagship.

Thanks xio-Feng for the tip. Cheers!!