Skip to content
You are here
Home > Latest Posts > Nokia, AT&T and Rock Band “Green Day” come together for launch of Nokia Music on 15th Sep in New York. 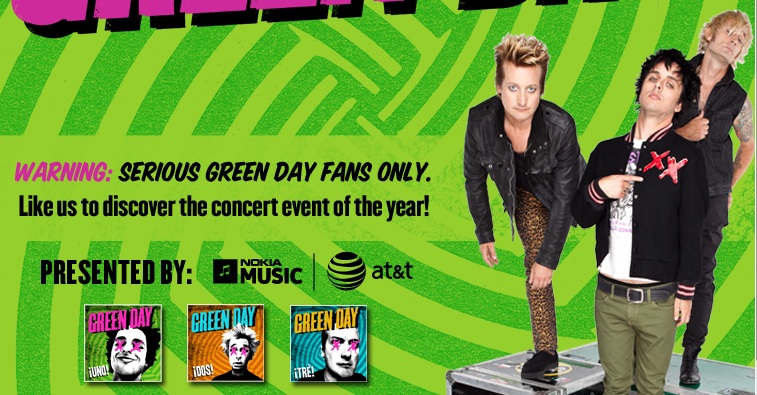 We are seriously liking it. It is good to see Nokia making serious marketing efforts in establishing the “Nokia Music” as a brand name in US market. Nokia, AT&T and famous Rock Band Green day has joined forces and Green Day will Perform at Nokia Music/AT&T Launch Event in New York City Saturday, September 15th at Irving Plaza.

Only thing is that there is no free entry this time as it was the case for Nicki Minaj’s event during Lumia 900’s launch. You need to head to Green day’s Facebook page and go to “Numero Uno Fan” tab to earn the ticket to the Green Day’s live performance.

Read the full Press release below,

Earlier this week, Green Day, Nokia and AT&T announced that they have joined forces to launch Nokia Music, a new music streaming service offering consumers free and unlimited access to playlists and songs from a global catalogue boasting 17 million tracks.

Nokia Music is a mobile experience exclusive to Nokia Lumia handsets currently available at all AT&T stores. AT&T is the nation’s largest 4G network. Consumers can stream unlimited music from a suite of over 150 exclusive playlists that are curated and kept up to date by an expert team of US based musicologists. The playlists span a wide spectrum of musical genres from underground Detroit house tracks to New York Philharmonic favorites.

Nokia Music also offers playlists created by global artists such as Green Day, who are an active part of the service curating their namesake playlists. Moreover, music fans can create their own personal soundtrack by selecting the Nokia Music ‘CREATE’ function that generates a playlist based on, and inspired by, the artists they love.

Fans will also be able to access three special playlists, curated by Green Day exclusively for Nokia Music and AT&T.