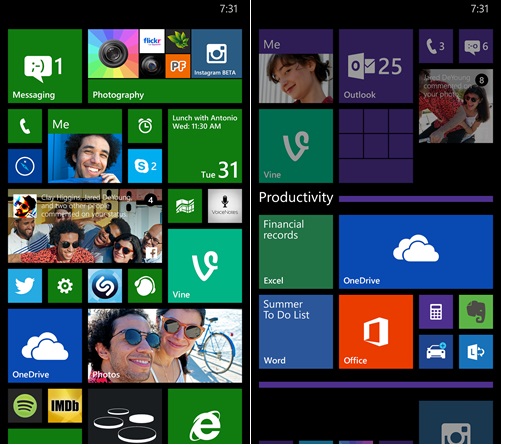 So, our sources were right after all. Not only GDR1 got RTMed last week, but it will be rolling out to Developers Preview devices next week, as confirmed by Microsoft in a blog post today.

The update brings some new features like native folders creation something which Microsoft wants to call “Live Folders” and also Cortana to UK and China as Beta and in India, Australia and Canada as Alpha.

We have been thrilled by the excitement around Cortana in Windows Phone 8.1. And we’re excited to make her available for people in China and the UK with this update as a “beta” and in Canada, India, and Australia as an “alpha”.

It is another thing that even after being in India, I have Cortana on my device since the time it was launched for US market.

Have a look at other features GDR1 has been officially revealed to bring with itself,

We’re also bringing some improvements for Cortana in the U.S., including new natural language scenarios, snooze times for reminders, and a number of neat additions to her personality (try asking “do an impersonation” and see what happens). We’ve also added the ability to invoke Cortana hands-free in your car for phones connected to car Bluetooth kits that are integrated with your contacts list. If your car kit is integrated with your contacts, you can now treat Cortana as a contact to invoke her, simply saying “Call Cortana” and then talking to her as you normally would.

You can now organize your apps into folders on your Start screen! We call this Live Folders because the live tiles of apps appear in the tile of the folders—you won’t miss tile updates because you group apps in a folder! To create a Live Folder, just drag a tile over another tile and then name the folder. Open the folder to change the folder name and arrange and size the tiles however you want.

The Xbox Music app has been updated to deliver much better performance in areas like app load and list scrolling. It’s also brought back features that were missing in the Windows Phone 8.1 Preview for Developers. From background sync of your collection, to swipe to advance, the product has been continually adding features in every two weeks for the past few months. And in the coming month, there will be a “quickplay” of recent playback activities, and support for Kids Corner. Some of these features/improvements are already there in the latest Xbox Music app with the Windows Phone 8.1 release, but some (Live Tile in particular) are specific to the Windows Phone 8.1 Update. More to come!

We made it easier for you to see the latest info about the latest apps and games available in the Windows Phone Store through its Live Tile. If you have the Store pinned to your Start screen on your device, you’ll get updates on the newest titles – refreshed every 6 hours – streamed dynamically to you throughout your day.

We have added the ability to select multiple SMS messages for deletion and forwarding, making it easier to manage your text messages.

With Apps Corner, you can specify which apps are displayed in a special “sandboxed” mode (like a protected Start screen) that restricts which apps are used. This feature is for businesses so they can allow access to select apps in cases where a full MDM solution isn’t required. Apps Corner can also be used to boot straight to an app. An example of where this scenario would come in handy might be with employees at a distribution center using Windows Phone devices that go straight into an inventory app they use to scan products in the warehouse when they turn on their phone. Apps Corner can also be used to setup retail demos. Retailers can export the profile of Apps Corner on one device and import it on to other devices. And developers can get data on usage from inside Apps Corner too.

We’ve made some improvements in the Windows Phone 8.1 Update to keep your data and identity more protected on public networks. For example, we have added the ability for you to send and receive data through a virtual private network (VPN) when connecting to Wi-Fi hotspots giving you another layer of protection. If you’re on your home wireless, creating a VPN provides anonymity to help shield your device from being identified by other devices on the network.

For your info, we have all the GDR1 details for you on our Windows Phone 8.1 GDR1 page.