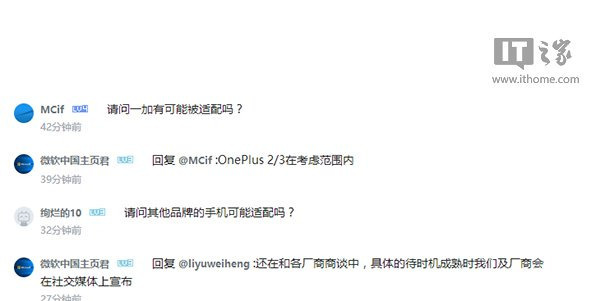 Now the company is planning to release Windows 10 Mobile ROM to some other devices including upcoming Flagships Xiaomi Mi 5 , and OnePlus 3. Even OnePlus 2 will get the ROM, Microsoft has confirmed on Weibo to an user. This has been a successful model for Microsoft to target popular Android device, that started with Xiaomi Mi 4. Just days ago we reported a rumor claiming that Xiaomi will launch a Windows 10 Mobile version of Xiaomi Mi 5 as well. So, seems something is cooking for sure.

It is worth noting that the OnePlus 3 & Xiaomi Mi 5 haven’t been launched in the market just yet but you can read more about their specifications by clicking on the links. So it seems like Microsoft is working with them internally for providing ROMs in their future devices. While there isn’t any official confirmation form Microsoft regarding this just a screenshot of the chat that we can share with you.