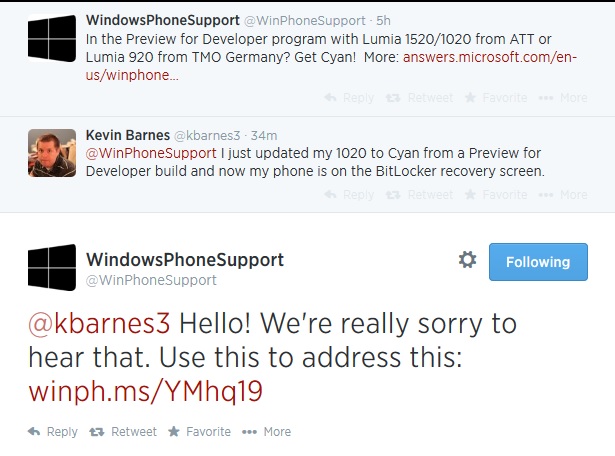 First the good news. As confirmed by “WindowsPhone Support”, Lumia Cyan is now rolling out to selected devices running developers preview version of Windows Phone 8.1, and these include Lumia 1020, Lumia 1520 on AT&T and Lumia 920 on T-Mobile Germany. Here is the complete statement on support page.

As part of our effort to resolve the issue with updating to Cyan while on the Preview for Developer program, we have rolled out the Cyan update to three specific device types this afternoon.

Customers on the following devices and participating in the Preview for Developer program can now take the Cyan update:

We continue to work on releasing the other devices to receive Cyan as part of the Preview for Developer program and hope to have more information in the future.

Now, the bad news is that after so much delay on Microsoft’s part, the Lumia Cyan Firmware – BitLocker issue on developers preview devices remains unresolved. You still need to use Nokia Software Recovery Tool to return to the latest software + firmware version, which in most of cases is Lumia Cyan itself, now.