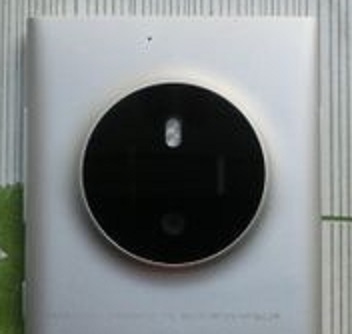 We won’t force you into believing this, as we ourselves are skeptical. A new tip, we have received from one of our regular tipster claims that Lumia 1030, that has leaked out in images yesterday will sport a higher mega-pixel count camera sensor than Lumia 1020 and will be bigger in size too.

The tipster claims Toshiba will again manufacture the sensor for Lumia 1030, like it has done for Lumia 1020, Lumia 1520 / Lumia 930 in past. Though, the Lumia 1030 camera won’t feature Xenon flash, but is expected to come with 4th gen short pulse LED Flash. It will also not feature a mechanical shutter unlike Lumia 1020.

While we can kind of figure out the lack of Xenon flash and mechanical shutter from the cropped image above, it is difficult to believe that Microsoft Mobile will really like to bring higher mega-pixel camera than Lumia 1020. We have seen 10 MP camera of Lumia 830 performing admirably in spite of its smaller module, so we think the trend is towards going slim with better performance. But, then rumors are interesting for some reason, after all!!

Do let us know what you think, in comments below.