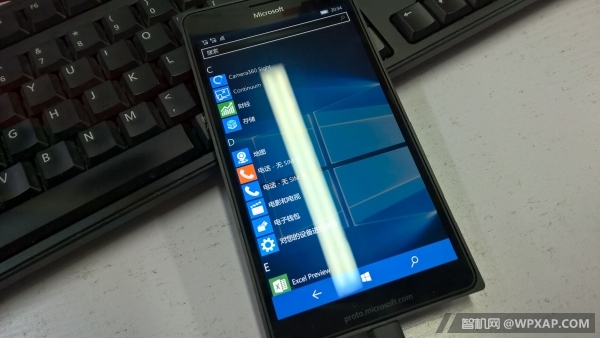 A new and the first hands-on image of Lumia 940 XL has been sent to us by Nokibar that show the device in its full glory. This is perhaps the best image of Lumia 940 XL yet and you can notice the design, side buttons and on-screen touch buttons. It resembles quite a lot to Lumia 640 XL though has thinner bezels on all the sides and may be more squarish on corners.

Time to have a look at some leaked images and screenshots of what looks like a upcoming Lumia Flagship prototype. The variant in question is RM-1116 and we can now confirm that it is the Lumia 940 XL. The leak confirms most of the stuff that we told you exclusively about upcoming flagships Lumia 940 and Lumia 940 XL, like Dual-Sim variants and all other key specifications. The on-screen touch buttons are there too. Snapdragon 810 and 2K resolution display is confirmed yet again. 3 GB RAM is also clear from the screenshots.

The prototype runs Windows 10 Mobile Build 10240 that is supposed to be the next preview build.

Continuum support is shown in screenshots.

Camera will be capable of capturing 1080p video at 90 fps, but wait we think 4K capture should be there too.

Also note the prototype is mentioned as “proto.microsoft.com” which shows that this is a newer device prototype unlike some leaks bearing proto.nokia.com.