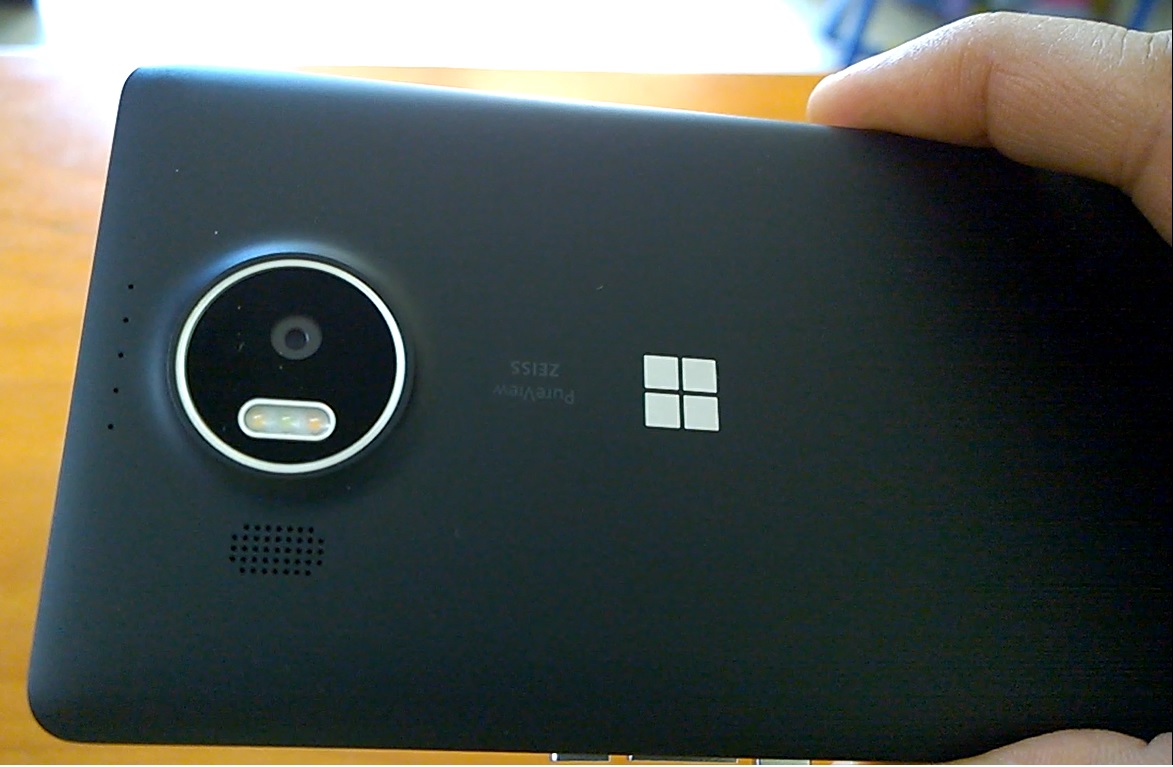 Lumia 950 XL and Lumia 950 are answers to prayers of Lumia / Windows Phone community for a Flagship after a long wait of two years and after missing one Flagship cycle after Lumia 930. Keeping in mind the interest generated by Lumia 950 XL, we have really subjected it to our one of the most extensive coverage.

We review the Lumia 950 XL on the basis of more than Two months usage of the device as our daily driver, per NPU’s tradition. So, it may help you in deciding whether you should really go for Lumia 950 XL as your next, if you really wanted to own one and are still undecided.

Design wise, it is not one of the most beautiful Lumia devices ever created. Somehow Microsoft didn’t bring any of Nokia’s iconic design strengths to Lumia 950 XL and rather kept it bland. In fact it compares closely to the Lumia 640 XL in size and design though it looks slightly better than Lumia 640 XL. Check our unboxing video below in which we compare it to Lumia 640 XL.

However being very slim and light, it feels great to hold in hand and put to work. So, it rather has an aura of workhorse than a beautifully designed Flagship. What score brownie points in terms of design is the removable back plate which offers great flexibility (in terms of removable battery, SD card ) and is totally melted in the overall design.

The removal back plate also lets one swap colorful and premium looking back covers from manufacturers like Mozo that makes it look more premium design wise.

Things start getting classy when we talk about other aspects of Lumia 950 XL. Display on Lumia 950 XL is really awesome. It has a Quad-HD, 5.7-inch AMOLED display. With help of CBD tech, it exhibits super-deep Black levels and great outdoor readability. It offers great viewing experience be it images or video with punchy colors and great contrast. Viewing angles are very wide outdoors, even on a bright sunny day.

Check the video below where we demo the display quality. The display can be tuned to suite your taste by changing and choosing from various preset options like Standard, Vivid, Cool and Advanced. When it comes to Advanced option you can then have option of setting color temperature, tint and saturation. It is a very bright a display and most of the time you would like to set it as low or medium bright.

As you can see in the video above it offers stellar experience while watching a video or movie, because of great display quality and rich music playback.

Iris Scanner and Continuum for Phones:

These two features are the USPs of Lumia 950 and Lumia 950 XL and it became the first smartphone along with Lumia 950 to ship with an Iris scanner which works way cooler than the fingerprint scanner available on many competitor devices. The Iris scanner works really fast and even in Dark and with Sunglasses on.

Check our video demo of the Iris scanner below.

Continuum for Phones is another feature that gives Lumia 950 XL an edge over competition when it comes to productivity. Check how the Continuum for Phone feature works in video below. The feature allows one to connect and use Lumia 950 XL as a PC on displays that support HDMI input. The great thing about this feature is that more and more universal apps are coming with the support for Continuum and can be used on a big display with PC like UI.

Imaging is one of areas, where Lumia 950 XL shines with its latest-gen 20 MP “PureView camera module”. We have compared Lumia 950 XL camera to Lumia 1020 camera extensively and we will mention the conclusions of our shootouts here. You can click here to check the full comparison and camera review. Slow Motion capture and 4K are neat tricks in the Lumia 950 XL’s arsenal too.

Lumia 950 and Lumia 950 XL cameras come the closest to Lumia 1020 camera in terms of image quality and capturing details than we have ever seen any other Lumia camera or even any other smartphone camera doing. In fact in any capturing conditions, Lumia 950 XL camera impresses a lot. It keeps colors vibrant yet more realistic than the Lumia 1020 camera and captures very good amount of details. The best part is lack of artificial sharpening or the introduction of the natural pixel-processing that keeps images natural. When we go to 200% crop level the difference in amount of details captured by both cameras become pronounced, yet it is really very respectable for a 20 MP camera to challenge the Lumia 1020’s 41 MP camera even at 200% crop. Lumia 950 is quite natural at capturing Bokeh Macro images just like Lumia 1020.

In low-light capturing conditions, Lumia 950 XL captures impressive images both with and without flash. But surprisingly in low-light without flash stills comparison Lumia 1020 beats it comfortably, even at 100% crop level and we feel that it should have been done better especially in this without flash capture. Though the Flash is probably the best you will find on any new smartphone camera and the RGB flash helps it capture natural-looking images in night again.

In a nutshell, when it comes to stills capture, Lumia 950 XL camera can easily replace your point and shoot cameras and it is certainly very potent camera in whatever lighting conditions, as the comparison with Lumia 1020 tells us.

Lumia 950 XL comes on top when we talk about video capturing. When we compare details captured by both cameras, they are really comparable. Lumia 950 XL camera however keeps subject more natural and colors more real. OIS works better on Lumia 950 XL and it is quite clear from the video samples.

It runs on Snapdragon 810 Octa-core processor with Adreno 430 GPU. The CPU /GPU combo was the best at the time of its launch and it doesn’t disappoint. The device is one of smoothest and most responsive smartphones, you will ever use. It has been rock solid as my daily driver and I have not seen it freezing or restarting even once during my long usage period, though I was lucky to get Windows 10 Mobile Build 10586’s later versions on it soon after receiving the review unit.

Lumia 950 XL has everything that can make it your favorite gaming tool. Great display, louder and richer audio output and last but not the least great gaming performance. You can play games for quite long and still it doesn’t get too hot.

It multitasks like a champ and handles many apps with ease. Edge browser is fast and modern. It offers great panning, zooming and scrolling. Microsoft has also kept adding features to Edge.

In the below video, we have provided a general, gaming, multitasking and browsing demo on Lumia 950 XL of around 15 minutes.

Though as many would note the last flagships had even louder speaker and it surprisingly misses “Dolby surround sound” support without headphones, a feature that was even present on Lumia 830. It still offers Dolby experience with headphones, but it is difficult to imagine a Lumia flagship coming without DTS support.

Lumia 950 XL has average to good battery life and I have been getting around 24 -28 hrs of battery life with heavy “blogger” usage of the device, which involves lots of browsing, apps testing and daily chores. Consider it around 28-32 hrs for a moderate to heavy use and that is really very impressive considering a massive Quad-HD 5.7-inch display and a new OS that was still undergoing improvements when it was launched.

The later OS builds have brought improvements in battery life of Lumia 950 XL. Though for better battery life you may like to give our earlier posted tutorial a try.

What must be mentioned is the Fast Charging feature that allows critically low to up 50 percent Battery capacity with only 30 minutes of charging. It is very convenient and very useful feature in real-life use conditions especially when you are in hurry.

Lumia 950 XL offers stellar call quality and the reception is usually very good. I didn’t face any issue like call drops etc and it holds well even during long conversations.

If you are fine with the design that may appeal to many because of its simplicity, it is a great package. A true power-horse and comes with some great exclusive and functional features like “Iris Scanner, Continuum for Phones and Hey Cortana” that really work. If you are a Windows platform fan or if you are on other platforms and want to try a recommended Windows 10 Mobile device, then go for it. It packs a 5.7-inch beautiful display but still feels comfortable while using with one hand. If all you wanted is a smartphone with blazing fast speed, stellar camera, great display and some high-end unique features then go for it.

Some may talk about lack of apps as compared to other two platforms and while one can’t pretend that Windows Store is as rich as other two platforms in terms of apps, it is not all gloom and doom. Windows 10 Mobile brought UWP or universal apps concept and we have started seeing functional and well-designed apps coming to the platform.

Check ratings assigned to Lumia 950 XL on overall and on individual aspect’s basis by scrolling to end of this article.

Visit our dedicated post to check Best Price Deals & Buy links for Lumia 950 and Lumia 950 XL from all markets including US, UK, India, Europe.