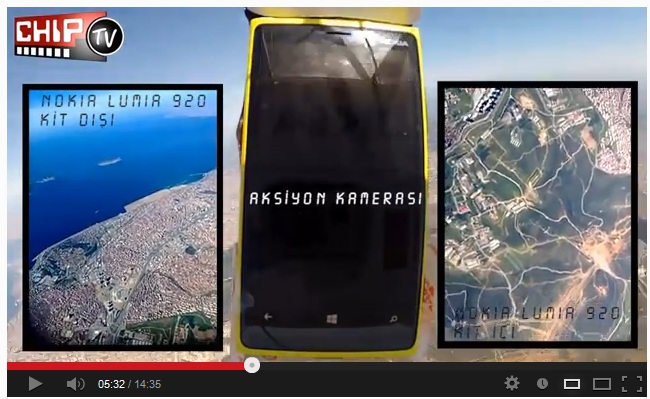 CHIP Magazine’s Turkey arm wanted to test a smartphone on the edge of space and see whether it would still work in these extreme conditions. Nokia was happy to oblige them with one of the sturdiest devices ever made, the Lumia 920. Three Nokia Lumia 920 smartphones were used for this test, two inside the kit, and one outside the kit of the special test kit. Lumia 920 survived below -60 degrees temp and 35000 meters drop and was still intact when retrieved post return from the space. Watch how it was done in the video below,

This experiment was recorded, from beginning to end. We did the recordings both with the phones and a special camera mounted inside the kit, shooting the Nokia Lumia 920 outside. The smartphones didn’t stop recording at any time during the experiment.  And when we retrieved the phones, they were still intact, operational and recording.

We discovered that even at below -60 degrees, Nokia Lumia 920 operates without any problems. Plus, high humidity caused by the clouds does not affect the phone. What’s more, it survived an incredible 35 000 meters drop, which even with a parachute is pretty hard going. So we can confirm that the Lumia 920 really is very tough.