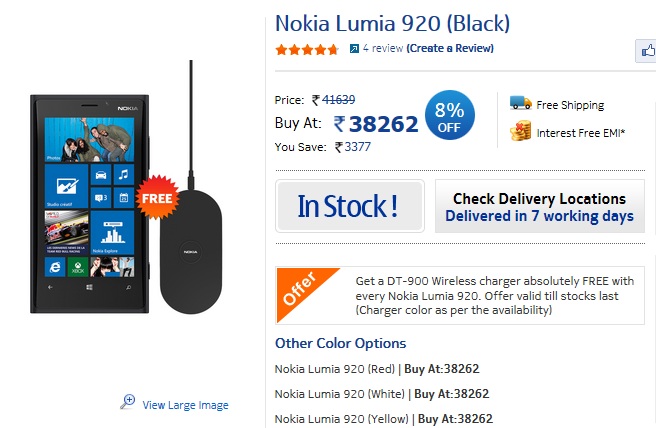 Nokia has priced Lumia 720 rather sanely in India as compared to some other markets like China and Russia. Results are impressive as Lumia 720 has now overtaken even Lumia 520 in popularity and is currently the best seller device at India’s no. 1 online retailer Flipkart. This is mighty impressive as it is Lumia 520 which is proving to be much more popular of the duo in most of the markets, where both have been launched.

Another good news coming from India for prospective Lumia 920 buyers. Nokia India is now offering Free DT-900 Wireless charger with purchase of every Nokia Lumia 920. This offer is valid till stocks last (Charger color as per the availability). Also note that pricing at official Nokia Shop is highest in India for Lumia 920 at Rs 38262. But the Free charger worth Rs 4000 may make it a lucrative offer.

Though we had hoped that Nokia would bring this offer to India when Lumia 920 was itself launched, but seems all great offers remain limited to US market where Nokia is still struggling to make a significant mark!!