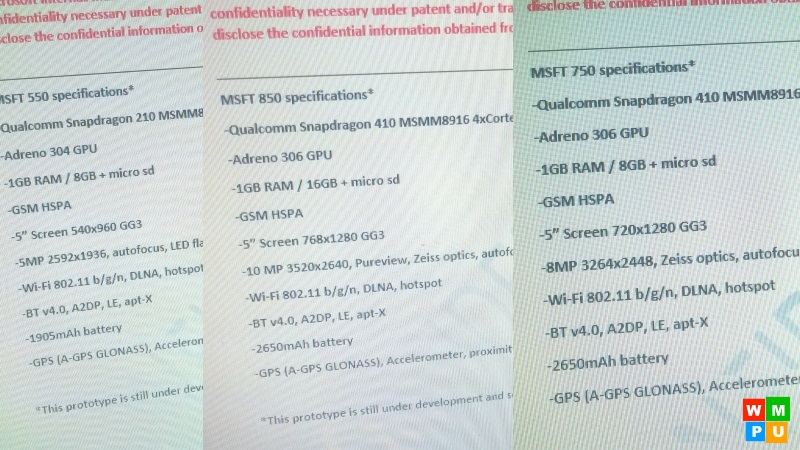 Our sources have now confirmed to us that Lumia 750 is coming by end of the year, while Lumia 850 is scheduled to arrive early next year. Read our exclusive report here.

Our sources also tell us that Lumia 830 successor is still under testing and will come with better specs than what can be seen for Lumia 850 below. We have shared about Lumia 840 (850) specification before and while we reported 5-inch display, 5 MP FFC, we understand that it may have better camera than 10 MP. The processor may also be better, though the display resolution is not known yet. Lumia 550 has already been announced by Microsoft.

Now WMPU’s sources have confirmed that these three devices Lumia 550, 750 and 850 stand cancelled in the wake of recent restructuring and Nokia write-off by Microsoft. But wait there is something that we can add here.

Name and Specifications of three upcoming Lumias have been leaked in images of some confidential Microsoft documents received by our friends at WMpoweruser. First of all it confirms that Microsoft has really ditched Lumia *40 generation and has named upcoming devices as Lumia *50. We have shared info about Lumia 950 and Lumia 950 XL specifications before along with price and launch timelines.

The latest leak reveals Lumia 550, Lumia 750 and Lumia 850 specifications. If you remember we shared about Lumia 840 (850) specification before, and if you compare, we do have reported 5-inch display, 5 MP FFC as can be seen in today’s leaked specs too, though the camera is only 10 MP, while we heard 13-14 MP rear camera. Anyways, have a look at the leaked specs of the three devices below.

It seems Microsoft will also release Lumia 350 and Lumia 450, too as we have seen two devices with 512 MB RAM at GFXBench. Not only this we have also seen RM-1128 with 4.7-inch 720p display and running Snapdragon 210 at GFXBench and its variant RM-1127 in Zauba data. Is that our Lumia 650?? So much for less than six devices in a year. That may be possible from next year it seems.