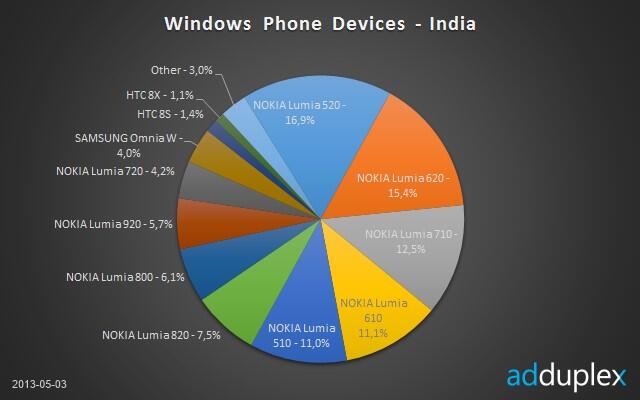 Adduplex stat teasers are on. And the very first teaser is about India where Lumia 520 has become the most sold Windows Phone one month in its release with 17% share. Lumia 620 has the 2nd highest market share with 15.4%. Really impressive, considering the fact even Lumia 620 has hardly seen 2 months in release. More impressive is the fact that Lumia WP8 devices now account for 49% of market share according to the above chart.

Though as we have mentioned in our last analysis that Adduplex stats are bit skewed towards WP8 device, so we can still safely assume 35% market share to Lumia WP8 devices which is mighty impressive considering how fast Lumia 520 and 620 have picked up market share in India.

Teaser number 2 is on and it says Nokia has 83% WP market share outside US. As expected, Nokia’s dominance is only on the rise with introduction of volume drivers like Lumia 520, Lumia 620 and Lumia 720.