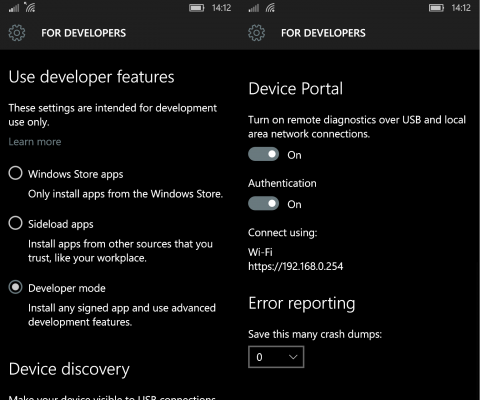 Today Russian site Onetile.ru has reported about a new leaked build of Windows 10 Mobile. The new build contains a new Device Portal in Developers setting. Because of this feature Developers gain power to upload .APPX files without any deployment software on their Windows PC.

If you are using the latest build of Windows 10 Mobile, then you might notice about availability of USB EEE, but it doesn’t works on current Insiders build. However in leaked builds, users can connect to the IP address of their phone over WIFI, but it requires authentication process in which users need to add PIN which is available on the phone.

After successfully completing the authentication process, users will see Apps, Processes, Performance, Devices and Networking in a web interface.

As stated above, these settings are only for developers use, and can harm your phone. However we don’t know whether this feature will available in official builds or not.