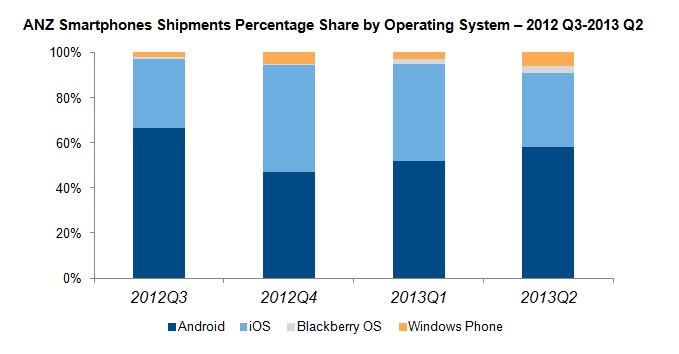 IDC press release for ANZ market has revealed that Windows Phone market share has grown in Q2, 2013 to around 5-6%. In Q1 it was about 2.5%. So, that’s growth of more than 100% quarter-on-quarter, though it is still not a big gain numbers wise. Android has also registered growth while both iOS and Blackberry see decline in their market shares echoing global trends. Windows Phone seems to consolidate its position further as the 3rd major OS in ANZ.

Although iOS continues to command a loyal following in the ANZ market, Android was able to pip iOS as the leading operating system (OS) in the market.  Android benefited from Samsung’s solid performance as well as the push by other Android vendors like Sony, Huawei, LG and HTC. Android and iOS combined accounted for more than 90% of all smartphones shipped into the region in Q2, highlighting their dominance in the OS landscape. Thus, the other platforms in the market face an uphill task in luring end-users from these well established platforms. Windows managed to secure the third spot followed by BlackBerry that launched its first set of BB10 devices earlier this year.